Finally, the wait is over

The first day of the 2018 World Cup is upon us, with hosts Russia taking on Saudi Arabia in the tournament's opening game in Moscow's Luzhniki Stadium. 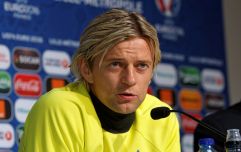 END_OF_DOCUMENT_TOKEN_TO_BE_REPLACED

The game was screened by ITV in the UK, with host Mark Pougatch joined by Gary Neville, Slaven Bilic, Ian Wright and Lee Dixon - not that many watching actually noticed who the pundits were... Instead, many viewers spent the opening minutes of ITV's World Cup coverage simply admiring their fancy Red Square studio.

Most were in agreement that this was something special...

Sorry but that ITV studio in Moscow is something else.

Well, ITV have blown their entire budget on the fancy studio in Russia #WorldCup

That ITV studio is outstanding.

Not a bad first impression. Over to you, BBC...

Russia's game with Saudi Arabia will be the first in Group A. The second, which sees Mo Salah's Egypt take on Uruguay takes place at 1pm on Friday. Morocco and Iran play the Group B opener later in the afternoon with the eagerly anticipated game between European champions Portugal and 2010 world champions Spain in the evening.

England, drawn in Group G, will play their first game of the tournament against Tunisia in Volgograd on Monday. Plenty of time to admire that ITV studio some more between now and then.