Dean Henderson removed from England squad due to injury

Henderson is out with a hip injury.

Manchester United goalkeeper Dean Henderson has withdrawn from England's 26-man Euro 2020 squad. It is as he continues to struggle with a hip injury. 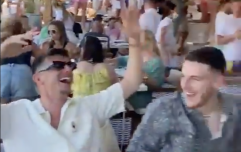 END_OF_DOCUMENT_TOKEN_TO_BE_REPLACED

Aaron Ramsdale, who was in the provisional 33-man squad has replaced Henderson in the team.

Henderson will now return to Manchester United for further assessment and rehabilitation ahead of the 2021/22 Premier League season. In the latter half of last season Henderson had managed to usurp David De Gea as United's first choice goalkeeper.

Henderson had sat out training for a second time on Monday due to his hip problem, and it has clearly been decided that the issue would have continue to hamper his ability to train during the tournament.

Sheffield United's Ramsdale was originally a member of Gareth Southgate's 33-man pre-tournament squad for the warm-up games in Middlesbrough against Austria and Romania. However he was one of the seven players to be left out of the 26-man squad for the Euros.

The 23-year-old will have to pass through standard Covid testing protocols before he is allowed to enter England's training camp.

It seems unlikely that Ramsdale will make an appearance over the next month though, with Jordan Pickford the current No 1, the Everton keeper having a vice-like grip on the position it would seem.

Under UEFA regulations for Euro 2020, teams are permitted to replace goalkeepers on medical grounds throughout the tournament.

Along with Pickford and Ramsdale, West Brom's Sam Johnstone is the third goalkeeper in the England squad.