When you think of the Brazil national side, you think of many things: Pele, Ronaldo, Ronaldinho, Neymar, that Nike advert in the airport, losing 7-1 to Germany... 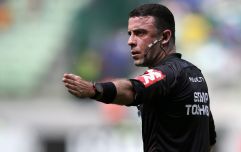 END_OF_DOCUMENT_TOKEN_TO_BE_REPLACED

There is also the iconic yellow and green shirt.

That is about to change, at least for a little while, as Brazil are returning to a predominantly white shirt for the first time since 1952.

TheSeleçao ditched the white after a crushing defeat to Uruguay at the Maracanã during the 1950 World Cup. The country was so wounded by the defeat in that they took the decision to stop wearing the colours and adopt the colours of their flag: yellow and green with blue shorts.

CBF Futebol unveiled the new strip, and it is a beauty.

The shirt is to commemorate the hundredth anniversary of the Copa America.

popular
Incredible case of the only known individual whose parents were two different species
Multiple fatalities after planes collide mid-air over airport
Andrew Tate banned from Instagram and Facebook
Former Playboy Bunnies detail what it was like having unprotected orgies with Hugh Hefner
Court hears cringeworthy poems Ryan Giggs wrote to his ex
The JOE Friday Pub Quiz: Week 308
Footage emerges of Andrew Tate getting knocked out during kickboxing bout
You may also like
News
Anaesthetist accused of raping sedated woman during C-section 'feared to have carried out more attacks'
Sport
Richarlison and Vinicius 'separated by Brazil teammates after training fight'
Sport
Police dog slips lead, takes football and causes chaos at Brazilian final
Life
Apple forced to pay a man more than $1,000 for not including a full charger with his new iPhone
Sport
Lewis Hamilton could become citizen of Brazil pending parliament vote
Next Page