Any word on that cure for all known diseases, guys? Still nothing? Right.

Scientists, in a very important study, have concluded that the vast majority of us are eating Jaffa Cakes wrong. Personally, I didn't realise there was a wrong way to eat something, unless it was pizza with a knife and fork or soup with your bare hands. But apparently this is the case. 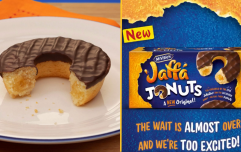 END_OF_DOCUMENT_TOKEN_TO_BE_REPLACED

They've stated that the actual, scientifically correct way to eat Jaffa Cakes is by doing that thing you used to see the slightly weirder kids in school do: nibble the entire way around the outer edge, leaving the very best part, the middle, until last. Their complete and total self-control always pained me to watch as I used to chomp through my entire pack in a full moon-half moon-gone process in under 2 minutes, and now it has come back to pain me some more.

Food scientist - yes of course that is a job - Dr Stuart Farrimond has revealed that “whilst the most common way to eat a Jaffa Cake is the Half Mooner technique, our research concluded that the All Rounder with the middle portion of the Jaffa Cake eaten as one, gives the optimum sweetness, taste and flavour, and this can only be fully appreciated by nibbling the edge off first and then eating the middle portion alone."

Farrimond carried out a series of lab tests on 12 volunteers and found that the "All Rounder" technique hits the "hedonistic breakpoint" of the Jaffa. I'm shaking my head in disgust now. How could I have been missing the hedonist breakpoint all these years?

Regardless of their findings, all I can to Farrimond and his evil team of biscuit scientists is this:

Small sample size mate. I am going to keep stuffing them into my mouth life a normal person. Thank you very much. Goodnight.

popular
Woman reveals cruel reason date dumped her after they had sex for the first time
Topless woman crashes Cannes Film Festival red carpet to protest 'sexual violence' in Ukraine
Leeds and Burnley demand Everton keep all documents in finances row
The JOE Friday Pub Quiz: Week 295
Fan 'stamped on by Oli McBurnie' feared he was 'going to die'
Helen McCrory's children give heartbreaking tributes at her memorial service
Amber Heard's agent reveals how actress was almost fired from Aquaman 2
You may also like
Sponsored
Five questions that will always get people talking
Life
Turns out we've been eating some McVitie's biscuits ALL wrong
Life
People are losing it over single man posting his dinners - but he doesn't get the fuss
Food
Papa John's delivery man scales cliff to deliver pizza
News
Aldi named worst supermarket for online order substitutions
Next Page