According to the Guinness Book of World Records, the appropriately named Carolina Reaper Pepper is the hottest chilli pepper in the world.

The hottest Carolina Reaper pepper measures in at 2.2 million Scoville Heat Units (SHU). by way of comparison, a jalapeno measures somewhere between 3,500 and 10,000 SHU.

Now on sale in Tesco stores in the UK, we here at JOE can say we were once tempted to give it a try for an article, but then respectfully chickened out decided there would be more appropiate things we could do in the office without hurting ourselves.

So we when heard news that a pair of women from New Jersey wanted to give the Reaper a try, our interest was piqued.

How painful could it be?

As it turns out, really, REALLY painful.

YouTuber Lizzy Wurst and her friend Sabrina decided to give it a go in a video on Lizzy’s YouTube channel recently and while it might have seemed a good idea at the time, they lived to regret it after roughly five seconds. 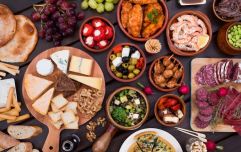 END_OF_DOCUMENT_TOKEN_TO_BE_REPLACED

How the video above wouldn’t put you off ever trying it out for yourself we’ll never know, but some people love a challenge and if a capacity to handle spicy food is your thing, then this is your Everest.

Hard to believe somebody actually ate three of these in under 11 seconds in 2014. No, really.

popular
Insulate Britain protester says 'she'll cry' if anyone dies as a result of M25 action today
Paul Pogba calls out The Sun for using 'lies to make headlines'
Vegan installs hand sanitiser dispenser ‘full of blood’ outside butchers
Forensic pathologist explains how Brian Laundrie's body skeletonised so quickly
Australian footballer Josh Cavallo comes out as gay
Radio presenter tells Insulate Britain protestor cement grows on trees
Squid Game creator says Netflix 'never gave him bonus' despite show making £650m
You may also like
Life
Try not to panic, but the world could have a serious wine crisis on its hands
News
Investigation finds tourists in Bali are being sold dog meat and being told it's chicken
Life
This guy’s desperate plea for chicken nuggets is on course to be the most retweeted tweet ever
Food
The best restaurants in the world for 2017 have been named
Food
There's a Buckfast Easter Egg and it's certain to be incredibly popular
Next Page