This is hilarious. He couldn't hack them...

The YouTube channel First We Feast has one show in particular that is adored by fans more than any others. 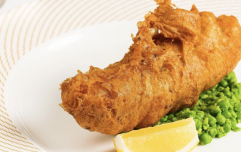 END_OF_DOCUMENT_TOKEN_TO_BE_REPLACED

That show is called Hot Ones, and it features loads of celebrities trying to eat the spiciest chicken wings in the world, to the best of their abilities.

They tend to start off fairly tame, before moving on to wings so hot that it often reduces the guest to tears. It's class.

And who better to test out some chicken wings than the legendary chef Gordon Ramsay.

Ramsay has been in demand to appear on the show for years, and when he finally did, he didn't disappoint.

Even though it was Ramsay in the quite-literal-hot-seat, he still managed to get some classic digs in on the food.

He asked the host: "Do you mind if I sponsor the wings going forward, so I can put some fucking decent meat on the bones?"

But by the end of it, while he was still swearing like a sailor, he was seriously struggling with the wings...

One line that we enjoyed, in particular, is: "What the fuck have you done to me? You said 'Come and taste some wings', yeah, my arsehole..."

Have a look for yourself here:

Clip via First We Feast