Irony is not quite dead yet.

Supersize Me was a film of vomit and cholesterol as Morgan Spurlock documented his diet of exclusively McDonalds produce. There was a collective distrust of the fast food giant after the film came out but memories are short and their happy meal appeal lives on. 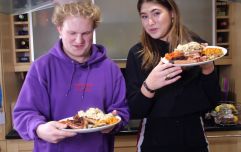 END_OF_DOCUMENT_TOKEN_TO_BE_REPLACED

Undiscouraged Morgan Spurlock is back in the food business now with a new venture called 'Holy Chicken' and is apparently trying to provide the ultimate triad of 'healthy, cheap and fast' and is marketing the chicken as antibiotic free and free range.

Spurlock opened the new joint in Ohio this week and it is proudly proclaiming to be "a fast-food chicken experience unlike anything you've ever seen!". That exclamation point really brings excitement to the endeavour doesn't it?

Holy Chicken opens three days after America's National Fast Food Day, which really makes you question how easy it is to get a National Day for almost anything.

If you feel like a look back at the film that started it all, here's one of the film's most stomach churning grease filled cud purging moments;