There’s something perfect in the simplicity of the McDonalds cheeseburger. It is a design classic, beloved the world over.

But would you want one that has sat on a shelf for six years?

That’s what Dave Alexander, a farmer from Ontario, Canada was selling on eBay.

END_OF_DOCUMENT_TOKEN_TO_BE_REPLACED

He told Canadian radio show As It Happens hat it was “surprisingly decent looking still.”

“The fries are stunningly good looking. The fries look like they were purchased this morning.”

“The burger itself has darkened a little bit. The bun is about as hard as a hockey puck, but it looks just like it's brand new cosmetically.” 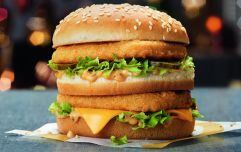 END_OF_DOCUMENT_TOKEN_TO_BE_REPLACED

He was selling the six year old burger and fries for $29.99 – approximately £17. Though it had no bids, and the listing seems to have been removed.

The burger and fries were purchased June 7th, 2012, by Alexander’s daughter, and he says he’d saved it as an experiment – he didn’t just put it on the shelf and forget about it or anything.