Pizza is probably one of the most harmless things in the world.

All the meat, cheese, bread... actually, scratch that. Morally pizza is probably one of the most harmless things in the world, but one pizza delivery in Virginia, USA led to a shocked customer and the sacking of a delivery driver.

And it was all over a joke.

The customer in question's sons had asked for a joke to be written on the box when they placed an order with Pizza Hut. The driver obliged, but their choice of joke was most definitely not appropriate.

The joke: "What do a pizza delivery driver and a gynocologist (sic) have in common?"

The punchline, if you don't know, is "They both get to smell it but can't eat it." You can sort of see why the driver chose that joke - it is a pizza delivery after all - but something as crass and mildly misogynistic as that is clearly not appropriate.


Speaking to ABC7, the customer said: "I was really shocked and floored that Pizza Hut would send that type of joke out. The employee even called and I told her that I hope she doesn't lose her job over this." 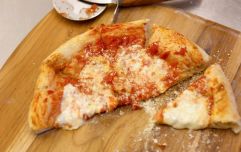 How to make your own pizza with friends via Skype

END_OF_DOCUMENT_TOKEN_TO_BE_REPLACED

Despite calling the customer to apologise, the driver was sacked from their job.

The sacking has caused something of an uproar, with people saying that it was a disproportionately harsh response for what was ultimately just a joke.

"How about a warning, instead of firing people over trivial things," one Twitter user wrote.

"She needs to complain to her kids who used the special request section to ask for the joke.That’s not what it’s for. Stupid stuff like that is why so many businesses say it’s not worth it and do away with special requests," another commented.

It's an unfortunate situation all round, but was a sacking too far? Let us know what you think.


popular
Buying your first house is about to get even more difficult
Manchester United agree terms with Inter Milan for Alexis Sanchez transfer
A definitive ranking of every swear word from worst to best
A must-see Jurgen Klopp documentary on Channel 4 this evening
The Rock has bought the XFL for $15 million
QUIZ: Name the films referenced by The Simpsons
Here's how to see who's been taking screenshots of your Instagram Stories