The Marks & Spencer Colin The Caterpillar chocolate cake is truly a defining part of British culture. Just looking at the photo of it, imagining the sweet crack of the outer chocolate, and the smooth embrace of the creamy filling, makes me stop still, nostalgic for my youth, like the reflective lead character of a late period Philip Roth novel. There wasn't, and still isn’t, a better cake to share on your birthday. Other supermarkets might now offer facsimiles, but they are not the same, they are but a hollow husk of the sheer ecstasy of a proper M&S chocolate caterpillar cake. 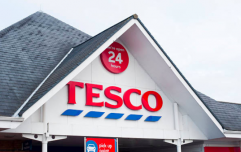 END_OF_DOCUMENT_TOKEN_TO_BE_REPLACED

That is a very big cake.

The giant cakes cost £40, weight 2.2kg, and serve 40 people. There is a small catch though – they have to be ordered seven days in advance, from Marks & Spencer online.

They also come with a customised iced message. And on Twitter, people have been somewhat confused by the bizarre choice of example message used in the promo shots:

So M&S now sell a 2kg Colin and
1: lol that they think it'll serve 40, I will eat the whole thing
2: lol that they've ignored the importance of a comma...BUT
2a: if they're suggesting using a 2kg cake to tell your mate to break up with their other half then TEN POINTS, M&S 🐛 pic.twitter.com/RG2ySauhmo

popular
What Netflix’s Seaspiracy gets wrong about fishing, according to a marine biologist
People fighting over name of game where you knock on someone's door and run away
Jake Paul accused of sexual assault by TikTok star Justine Paradise
Man faces three years in jail in Dubai for legally smoking marijuana in his own country
Flatpack expert charges people to assemble Ikea furniture after job loss
QUIZ: Can you get 20/20 in this desperately tricky capital cities quiz?
Covid lockdown 4: Could it really happen and how can we prevent it?
You may also like
Entertainment
Could you win The Great British Bake Off?
Food
Four amazing booze-soaked cakes to treat yourself with for the Bank Holiday
Life
A guy lost a bag full of cake on a Tube train, then a total stranger came to the rescue
Life
Someone made a life-sized Prince George cake and it’s the creepiest thing you’ll see all week (Pic)
Sport
Man City's record signing Kevin De Bruyne has a surprising hidden talent
Next Page