We all know the unique pangs of hunger that come towards the end of a night out, and now even the strongest case of the munchies can be cured with Scotland's latest invention, the deep-fried chocolate bar calzone.

Weighing in at an estimated 2,000 calories, the sweet treat is the brainchild of Glasgow outlet Roman's Pizzeria, and contains two deep-fried Mars bars doused in caramel, topped with grated almonds and a scoop of vanilla ice cream. 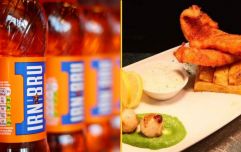 END_OF_DOCUMENT_TOKEN_TO_BE_REPLACED

The £4.50 creation has certainly been popular thus far, and Roman's will be hoping it reaches the same cult status as that enjoyed by the original deep-fried Mars bar of Haven Chip Bar in Aberdeenshire.

Restaurant owner Fraser Walker said of the calzone: "The shop has been open here for about five and a half months and we wanted to bring out something different.

"We've seen restaurants adding Nutella in a calzone. We just thought the deep fried Mars bar is a Scottish thing, so why not put it in a calzone?

"It's definitely not a dessert for someone who is on a diet."

The calzone has set a new standard for outlandish sugary creations and has already been dubbed the Mars-gherita Pizza.