An obesity organisation has called for new laws to control portions

Research campaign group Obesity Action Scotland has revealed that the size of a portion of chips has gotten 80% bigger since 2002. 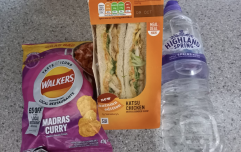 END_OF_DOCUMENT_TOKEN_TO_BE_REPLACED

The group visited 30 takeaways in Glasgow during May, and found the average portion weighed 380g.

According to the Food Standards Agency's portion booklet from the time, in 2002 the average serving was just 210g – and increase of 17g, which is more than a 80% increase.

The research found that more than 92% of the servings were larger the 2002 average. The largest portion was a whopping 755g.

Chips – Scotland’s favourite food purchase out of home. But are all things equal? Find out more at https://t.co/NFi5rDYRjP #gamechanger #bananaforscale pic.twitter.com/KrS3HIM5SW

Obesity Action Scotland have now called for new laws to control the size of portions, and limit the amount of calories.

Lorraine Tulloch, from OAS, said: "What is served as a portion of chips has grown significantly since 2002. Today's average bag of chips contains around half of the daily recommended calorie intake for a woman.”

"We are urging action to improve the out-of-home food environment to ensure people have access to smaller portions and are aware of the calorie content of the items they are purchasing."

popular
Pizza Hut customer outraged over 'sexual' ketchup label that reads 'shake, squeeze and squirt'
How did Brian Laundrie’s parents find his remains in a few hours?
The JOE Friday Pub Quiz: Week 266
St James' Park to get new name under Newcastle new owners
Taliban 'behead junior volleyball player and post photos of her head on social media', report says
Protesters gather outside Premier League HQ to call for an end to Saudi involvement in football
Alec Baldwin asked 'why was I handed a loaded gun?' after fatal on-set shooting
You may also like
News
Bring back masks and WFH or risk winter Covid surge, Johnson warned
Entertainment
George Alagiah taking break from BBC News after cancer spread
News
Bill Clinton hospitalised in California with infection
Coronavirus
Study reveals why some people get 'Covid toe'
Life
Two-thirds of under 30s report suffering from 'Covid back'
Next Page