Anyone fancy a trip up there?

A Scottish fish and chip shop has been voted on of the top 50 food experiences in the world.

Lonely Planet have revealed their pick of the best 500 places to eat across the entire globe, and The Bay Fish and Chips shop, in Stonehaven, on the east coast of Scotland came in at number 31 on the Ultimate Eatlist.

"I didn't know about it until I saw someone had tweeted the news out but it's a huge honour. Stonehaven is a quaint place to be in, it was originally a fishing village, so it's just nice to walk along the beach with the boats and a plate of chips."

@thebayfish is the undisputed fish and chip shop Champion of the World, congratulations, delighted as it happens to be on my doorstep pic.twitter.com/NfbLQ8jovY 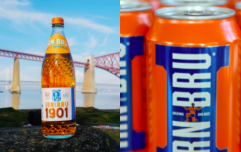 END_OF_DOCUMENT_TOKEN_TO_BE_REPLACED

The restaurant’s beautiful location was cited as the recent to make the trip.

Lonely Planet said: "Its pebble-strewn beach traces a kilometre-long bay; sailing boats bob in the harbour; rockpools teem with crabs and sea stars; gulls ride on the breeze; and in the distance, the leaden horizon of the North Sea. Completing the scene, halfway along the beach is The Bay Fish & Chips, whose fish is wild-caught from Marine Stewardship Council-certified stocks.

"Considering the setting, the sustainability and the beautifully cooked fish, is it the best fish and chip shop in the world? The constant queue suggests so."

Topping the list was getting pintxos on the streets of San Sebastián. The guide explained: “To get the full pintxos and San Sebastián experience, have a lazy day in the city and surrounds, take an afternoon nap, and then head out around 9pm. You’ll never be more than a few minutes from your next bar, a whole new menu of tasty treats, and a whole new group of people eating and drinking – just follow their leads.”

Second on the list was visiting curry laska stalls in Kuala Lumpur, followed by getting a sushi masterclass in Tokyo.

popular
How did Brian Laundrie’s parents find his remains in a few hours?
Taliban 'behead junior volleyball player and post photos of her head on social media', report says
St James' Park to get new name under Newcastle new owners
The JOE Friday Pub Quiz: Week 266
Real life Squid Game coming to UK and you have to sign a 'medical disclosure' to play
Alec Baldwin asked 'why was I handed a loaded gun?' after fatal on-set shooting
Producer says Alec Baldwin should be charged with manslaughter over accidental shooting
You may also like
News
Video shows teens joyriding steamroller through a housing estate
News
'Loch Ness Monster' caught on drone footage by wild camper
News
Island in Scotland goes on sale for £50,000
Life
Scotland urged to expand four-day working week on same pay trials
News
Scotland to trial four-day work week with no loss of pay
Next Page