There's nothing quite like smashing a Big Mac from McDonald's when you're absolutely ravenous.

There are times when grilled chicken and salad just won't do. 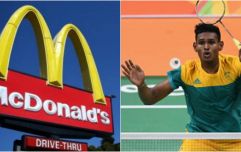 Olympian drowns his sorrows with a ludicrously huge McDonald's feast

END_OF_DOCUMENT_TOKEN_TO_BE_REPLACED

But like any junk food, the moment you've wolfed it down is when the food guilt strikes.

However, nailing a burger and fries might not be as bad for you as previously thought...if you're doing exercise.

First came the research that McDonald's could be just as good as any nutritional supplement after a heavy workout.

Now researchers have found just how much exercise you need to do to burn off the calories from eating things like Big Macs, fries, Cadbury's chocolate and pizza.

And it's not as much as you might think. 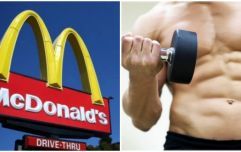 END_OF_DOCUMENT_TOKEN_TO_BE_REPLACED

It would take 42 minutes of cardio or 57 minutes of weightlifting to burn off, according to the research published in the Independent (sadly it's longer for women at 51 and 68 minutes respectively).

If you scoffed a large portion of McDonald's fries would need to do 40 minutes of cardio or 53 minutes of weightlifting to shift the 460 calories.

But a Cadbury's Dairy Milk would only require 21 minutes of lung-busting cardio or 28 minutes of weights to burn the 237 calories in a 45g bar.

Just make sure you're not eating them all at once, or you're going to need a full day at the gym...

popular
ITV News' intro to Downing Street Christmas party clip is absolutely brutal
Majority of people think Boris Johnson should resign, according to new poll
Robbie Savage 'started to tear up' as son Charlie is named on Man Utd bench
Met police to review leaked video of Downing Street aides joking about Christmas party
Boris Johnson apologises for a party he says didn't happen
Electrician jailed after castrating several men at their request in Germany
Pope says sex outside marriage 'isn't most serious sin'
You may also like
Sport
Lawrence Okolie recalls story of nearly reacting to rude customer in McDonalds
News
Horror picture shows worms in McDonald's drinks machine
Food
You can now get paid to eat Greggs' vegan festive bake
Life
Kids 'like when mum smokes weed' because they 'get McDonald's when she gets munchies'
News
Homeless man left in tears over gift after 'McDonald's staff pour drink on him'
Next Page