What do Premier League footballers eat before and after a game?

So what do Premier League footballers really eat on game day?

Wayne Rooney once said "I tend to just have cereal before a game, probably a bowl of Coco Pops. The normal ones, not the Moons and Stars". Rio Ferdinand was also spotted snacking on Jaffa Cakes at half time.

To an extent, Rio can get away with this in the middle of a high-intensity match, but for the most part, players stick to a nutrition schedule as meticulously-managed as their time on the training pitch.

Long gone are the days when players would wolf down fish and chips with a few pints of lager post-training. Diet and nutritional programming has progressed in a similar vein to strength and conditioning - an approach that owes a lot to Arsene Wenger in the late 1990s.

If you don't want to reach for the cereal box or snack on biscuits before a match, here's what most footballers eat (hint: it's not just pasta and chicken).

What goes into a footballer's diet plan?


We spoke to PureGym Manchester personal trainer Phil Williams. Williams said: "Players will naturally reduce their calorie intake during the off-season as they're not as active. But as pre-season begins, their energy output will increase, and more calories are needed. 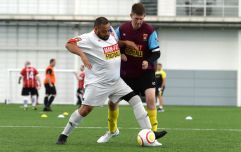 END_OF_DOCUMENT_TOKEN_TO_BE_REPLACED

"Some players have different approaches for the days they are playing and training compared to rest days, as a rest day will require less energy, they may choose to reduce their calorie intake."

Joshua Dyson is a nutrition consultant at the Manchester Institute of Health and Performance (MIHP) who has also worked with NFL side Seattle Seahawks, Sri Lanka Cricket and Sale Sharks Rugby Academy.

Dyson told JOE what footballers should be eating and drinking on match day.

Dyson: "The goal of the pre-match meal is to top up carbohydrate energy stores.

"Around 2-3 hours prior to kick off, consume a meal rich in carbohydrate with moderate protein. To minimise the risk of gastro-intestinal issues (e.g. bloating, stomach cramps) during the match ensure this meal is low in fibre, lower in fat and moderate in protein."

What are the best carb sources? END_OF_DOCUMENT_TOKEN_TO_BE_REPLACED

"If expenditure (the calories you burn) is going to be high, consider an additional carbohydrate snack 60 minutes before kick off to further top up energy stores e.g. flapjack, granola bar or banana."

If you're playing a full 90 minutes rather than five-a-side, this would be a wise move.

How should footballers recover after a game?

"To optimise recovery following a match, simply remember the 3 Rs." 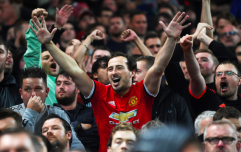 Is watching football bad for your heart? A new study tried to find out

END_OF_DOCUMENT_TOKEN_TO_BE_REPLACED

"Look to consume around 20-30g of high quality protein (rich in essential amino acids) to optimise the muscle building process. Additionally, the inclusion of fruit, salad and vegetables is encouraged to further assist muscle recovery."

"To kick start your recovery, include a carbohydrate serving within your post-match nutrition."

"It is important to replace fluid lost during match play to restore a hydrated state. To rehydrate appropriately individuals should also replace electrolytes lost during activity.

If you can't wolf a meal down immediately post-match, a whey protein shake or pint of flavoured milk will still tick all the boxes.

You may also like
Sport
Arsenal to sack their head scout who discovered Cesc Fabregas and Hector Bellerin
Sport
Hands on with FIFA 21, where the 'fundamentals of football' come first
Sport
Manchester City complete signing of Nathan Ake from Bournemouth
Sport
Arsenal offer Willian three-year contract with staggering signing on fee
Entertainment
A must-watch documentary on Nicolas Anelka has just landed on Netflix
Next Page