Inspiration for the iPad generation.

At the age of nine years old, Bizzotto has just become the youngest competitor in the 24-hour BattleFrog BFX24, an obstacle course designed by the U.S. Navy.

She ran, climbed, jumped, crawled and swam her way through a course filled with 25 obstacles, including an eight-kilometre swim, a rope climb, a barbed wire crawl, and climbing a 3.6-metre wall.

END_OF_DOCUMENT_TOKEN_TO_BE_REPLACED

But what made a fourth grader from Florida take on this mountainous challenge?  She was being bullied at school.

"People would call me names and say I wasn't a good player,"  she told the Miami Herald.

"I didn't want anyone else to go through what I did. I want to set an example and show other kids that they can do or be anything they want."

So Bizzotto put herself to work with the type of training regime to make most people's eyes water. Aided by her father and gym owner Christian Bizzotto, she worked five days a week, three hours at a time for over six months to get in shape for the BattleFrog race. 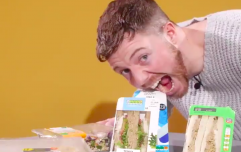 What's the healthiest meal deal you can buy in supermarkets?

END_OF_DOCUMENT_TOKEN_TO_BE_REPLACED

Remember, she is only nine years old.

After completing the race, she says she want to lead a positive movement to inspire other young people to go out and challenge themselves.

The 9-year-old's next goal is to raise money to The Athlete Race, which she is crowdfunding here.

As for the bullies, her father put it best, "I think the bullying thing has died down without her having to take physical action just because her outlook is so much different now that she knows how to defend herself."

You said it Christian. Now we're off to feel rather inadequate for the rest of the day...

popular
Genius lettuce hack 'puts people to sleep in seconds' - and people swear by it
East London nightclub deaths: At least 22 people found dead in South African 'tavern'
'Dinosaur lady' wins internet with baffling Question Time remark on rail strikes
The JOE Friday Pub Quiz: Week 300 - the Triple Century
Glastonbury: Watch the incredible moment Olivia Rodrigo and Lily Allen dedicate 'F*** You' to US Supreme Court
Roy Keane booed as he appears on big screen in front of 50,000 fans
Derby County to exit administration after bid for club is accepted
You may also like
Fitness & Health
These are the two muscles people most commonly forget about when training, according to experts
Fitness & Health
Top bodybuilder shows us 10 moves every hardgainer needs to pack on muscle (Video)
Fitness & Health
JOE tested Science In Sport's new whey protein isolate in all its minty glory
Fitness & Health
The 'fact' you need to drink 8 glasses of water a day turns out to be bullsh*t
Fitness & Health
Do more volume in the gym with this one simple CrossFit technique (Video)
Next Page