The actor suffers from the most common form of skin cancer. 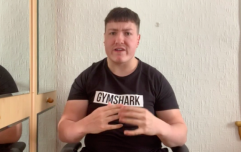 END_OF_DOCUMENT_TOKEN_TO_BE_REPLACED

While this form of skin cancer is rarely fatal, Jackman is still encouraging people to be wary when they're out in the sun.

On a post to Twitter, he said ""Another basal cell carcinoma. Thanks to frequent body checks and amazing doctors, all is well. Looks worse with the dressing on than off. I swear! #wearsunscreen"

Another basal cell carcinoma. Thanks to frequent checks & amazing doctors, all's well. Looks worse w the dressing on then off! WEARSUNSCREEN pic.twitter.com/IA7N6Ca3Oe

Jackman will put on Wolverine's claws for the final time when Logan is released on 3rd March.

popular
Uefa to investigate Manuel Neuer over rainbow armband
Uefa stop review of Manuel Neuer's rainbow captain armband
England and Scotland fans flimed fighting after "we hate Scotland" chants
The JOE Friday Pub Quiz: Week 248
Norway decides against boycott of Qatar 2022 World Cup
QUIZ: Can you name these countries on a map?
Didi Hamann says Ronaldo looks "a fool" after needless showboating against Germany
You may also like
Life
Assisted dying bill to be put to Scottish Parliament
Sport
Doctors says Christian Eriksen’s first words after cardiac arrest were ‘I’m only 29’
Sponsored
Four simple ways you can vastly improve the quality of your sleep
News
Scientist says 'lockdowns are the single biggest mistake in history'
News
MPs call for legal age to buy cigarettes to be raised to 21
Next Page