If you're one of those guys who struggles to put on 'size' despite hours of training at the gym, you're not alone.

You probably fall into the classic 'hardgainers' category where no matter how hard you try, you just can't get any bigger.

Hull University student James Stephenson used to fit into this same bracket. The 21-year-old is sports mad, regularly doing football, golf and running, but he really struggled adding quality muscle mass and he quickly lost motivation with the gym when he didn't see results.

But incredibly James managed to add a stone of solid muscle to his frame on the Titan Force body transformation project which he did to raise money for the Teenage Cancer Trust.

In just six months he revolutionised his diet, changed his lifestyle and managed to put thick slabs of muscle on his traps, chest and back - something he thought was impossible before starting the charity training plan (which you can apply to join free right here starting in January).

He was coached by Hull personal trainer and former Royal Marine Rich McKeating and ex-bodybuilding champion Dan Norman alongside another eight young guys who all wanted to build muscle, burn fat and get in the shape of their lives.

The project, which has raised £4,000 for TCT so far, aims to show men that you can get in incredible shape without steroids and expensive supplements through straightforward training, simple diet and good old fashioned hard work alone.


So why did he join the Titan Force project? And how did he manage to add so much muscle?

END_OF_DOCUMENT_TOKEN_TO_BE_REPLACED

'I tried to change previously but had no luck,' James explains. 'I was pretty knowledgeable when it came to fitness. I'd studied sport for years, so generally knew most exercises when prescribed.

'I just generally struggled with diet before the project. Needed a professional and a group challenge to push me along.'

Before he started Titan Force he was doing more cardio activities and says his diet was 'pretty average', eating only around 2,000 calories a day.

Like every hardgainer, if you're not getting enough calories in you really will struggle to gain weight - something the project has taught him.

'It was 100 per cent due to diet,' he says when we ask why he struggled to put size on. 'I believed one protein shake and that’s that.

'This project helped me to realise that the diet is just as important -  if not more important - than actually the work you do in the gym.'


So one of the first things James changed up was his diet - he upped his calories to 3,500 and he still struggled to gain weight.

END_OF_DOCUMENT_TOKEN_TO_BE_REPLACED

It wasn't until he doubled his calorie intake - putting him at 4,000 cals a day - that he started to add weight more regularly.

'My weight did fluctuate throughout the process but gained over a stone in the end. I increased protein massively, chicken and salmon were regular foods for me.

'I cut most fats down and ate around five decent sized meals most days.'

This is what his daily food diary looked like...

But in order to add the thick muscle mass he craved, James had to put in some hard training too.

The Titan Force methodology is straightforward - lots of barbell and dumbbell work with simple movements like squats, deadlifts, presses and rows with variation changes every few weeks to keep the muscle adapting to the stimuli. 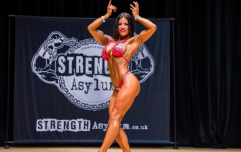 END_OF_DOCUMENT_TOKEN_TO_BE_REPLACED

'After a month or so, I changed to EDT training (Escalating Density Training), 15 minutes' continuous training, which was very very hard.

'Then the final few months was higher weight [and] lower reps, smashing the upper body more with no cardiovascular work throughout.'

There is no denying the results that James achieved on the plan.

'I gained a stone, I gained huge amounts of self confidence and I gained serious amounts of strength and bulk on my traps, chest and back.'

But the Titan Force project has changed his whole mentality and his approach to training from the guy who six months ago felt like he just copied what others were doing in the gym.

'I felt like I was able to push my body to the extremes, and my body could hack it. I developed a mentality of “one more rep”.

'My weights massively increased in the last 2 months. Starting on 17.5kg dumbbell bench press and progressing to 32.5kg each arm gave me a huge boost in confidence.

'I class myself now as a hugely active person. I was already an active person but feel I have so much more of a "get up and go" attitude.

'The key things I've learnt are: train bloody hard, eat a hell of a lot, and keep 100% focused on your end goal. Sometimes you do hit that wall, but having a partner there, having an end goal and having a charity behind you, it makes it a little easier.'


popular
This weight training trick builds 50% more muscle in just eight weeks
QUIZ: You can't get 10/10 in this extremely frustrating geography quiz
Commentator runs out of words for Adama Traore, makes car noises instead
QUIZ: Name the US States which contain the letter ‘R’
Who should play Paul Gascoigne in the film of his life?
Is it possible to build muscle and lose fat at the same time?
QUIZ: Whose face have we mashed Neil Warnock with?