Just don't do any of this, OK?

We saw some alarming things a couple of weeks back when the male population proved what exactly drives them forward.

END_OF_DOCUMENT_TOKEN_TO_BE_REPLACED

Yes, a huge number of men claimed they would rather cut off their arm (right up to the shoulder) rather than give up sex... I don't know about the rest of you, but I rather like my arms the way they are.

But in fairness, if you do any of the things mentioned below, you won't have to worry about having to make the choice between having sex and cutting your arm off, because nobody is going to want to have sex with you. Capiche?

So picture the scenario; you've finally done it, you've sweet talked your way into bed with a fair member of your preferred sex, and it's imminent... you're going to have sex.

Nothing could possibly scupper your chances now.

END_OF_DOCUMENT_TOKEN_TO_BE_REPLACED

Except if you do any of these things, according to a study of 2,000 people conducted by Superdrug Online Doctor on the biggest mood killers during sex.

This is why men and women end sexual relationships according to the study, and we urge you in the strongest possible terms not to fart before, during or  after sex. 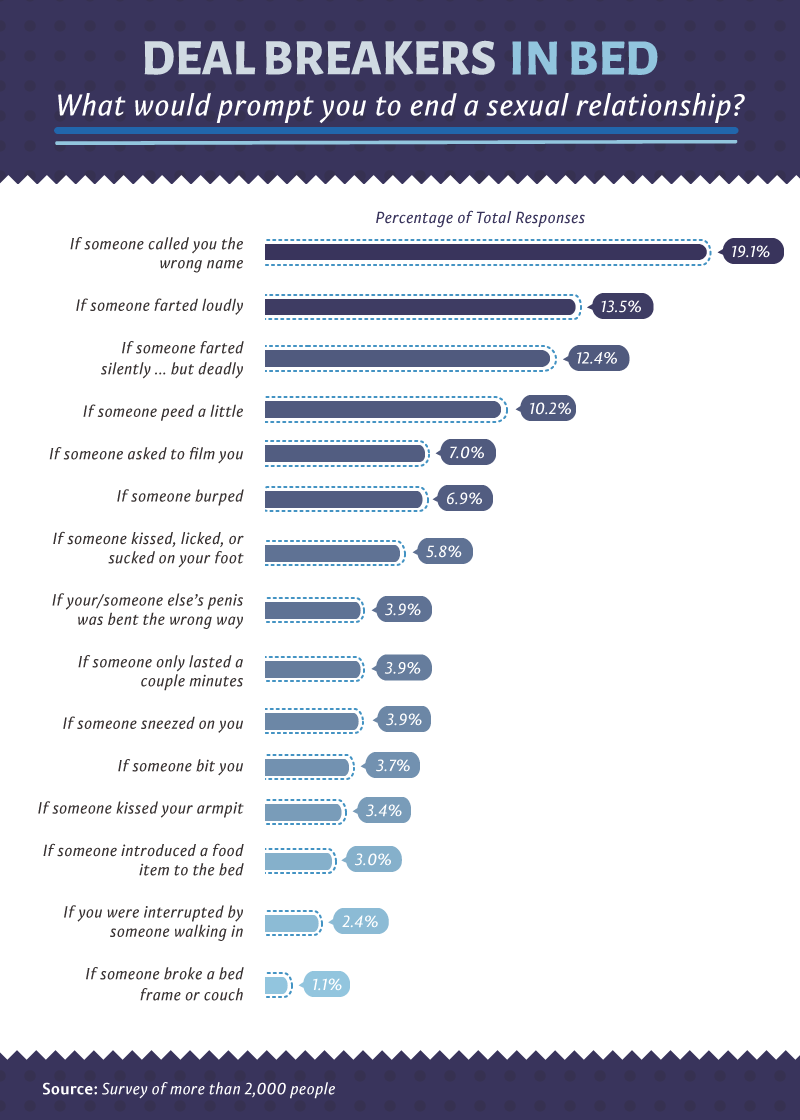 popular
Some Stranger Things fans are now trying to cancel Metallica
UK speed limit on 60mph roads to be reduced to 30 and 20mph for the first time
Mystery of Olivia Newton-John's ex-boyfriend who vanished on fishing trip 17 years ago
Vet's heartbreaking plea after pet desperately tries to follow owner when it's put to sleep
Runner finishes last in 400m race as penis keeps falling out of shorts
Tens of thousands rush to sign-up to 'Enough is Enough' campaign - crashing their website
Asda slammed for 'embarrassing poorer families' with new product redesign
You may also like
News
Woman almost died during sex when orgasm popped aorta
Sex
Woman reveals unusual problem about her relationship - her boyfriend gets 100 erections a day
News
Military museum forced to ask couples to stop having sex behind exhibitions
News
‘Blue balls’ is a real-life condition and not a myth made up by teenage boys, doctor confirms
Weather
Naked couple filmed having rooftop sex during record heatwave
Next Page