Calm down, Tom. Seriously. You don't need to risk your life for every single film

Tom Cruise is 58 years old. That's not necessarily relevant to this story, but worth bearing in mind.

Mission: Impossible 7  director Christopher McQuarrie has shared an image on Instagram teasing what death-defying stunt Tom Cruise is going to do in the latest instalment in the franchise.

It is a giant ramp. Off the Helsetkopen mountain in Stranda, Norway. And Tom Cruise jumped off it on a motorbike.

Video of the stunt has also emerged online.

Christopher McQuarrie and Tom Cruise are taking Mission: Impossible 7 to another level pic.twitter.com/eZaa5z8s5Y

A post shared by Christopher McQuarrie (@christophermcquarrie) on Sep 6, 2020 at 9:14am PDT 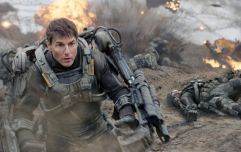 END_OF_DOCUMENT_TOKEN_TO_BE_REPLACED

The video appears to show Cruise ride down the giant ramp on a motorbike and leap off, only to relase a parachute as his bike falls to the ground.

Then, in Mission: Impossible Ghost Protocol, he scaled the Burj Khalifa in Dubai, the tallest building in the world.

And in Mission: Impossible Rogue Nation, he hung out the side of a military plane as it took off and reached an altitude of 5,000 feet, without the use of a stunt double.

Finally, for Mission: Impossible Fallout, he became the first actor to do a High Altitude Low Opening (HALO) jump from 25,000 feet.

He also learnt to fly a helicopter for real for that film. No biggie.

Mission: Impossible 7 began filming in February, but like most big productions, it was shut down due to the coronavirus pandemic. Production restarted again this month.

Joining Cruise in returning are Ving Rhames, Simon Pegg, Rebecca Ferguson, and Vanessa Kirby to reprise their previous roles in the franchise. New additions to the cast include Marvel stars Hayley Atwell and Pom Klementieff.


popular
The Boys' showrunner says the Marvel films are 'dangerous' to society
QUIZ: Can you identify these capital cities on a map?
FootballJOE’s Badge Quiz – #5
Sunday league player scores ridiculous no-look corner
A definitive ranking of every swear word from worst to best
Bruno Fernandes caught by surprise at being named Man Utd captain
QUIZ: Name these 28 football clubs from their badges