True or False? We test the legitimacy of Sting & Shaggy's bromance

Like most, hearing that Sting & Shaggy were releasing an album together took me a little by surprise. But seeing their bromance blossom on screen and through the music they were making made me a believer. 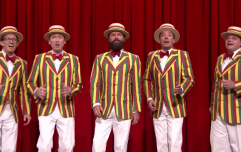 END_OF_DOCUMENT_TOKEN_TO_BE_REPLACED

The way in which they bounce off of one another is something that has to be seen in the flesh. So with that said we got them in a room together to test their bromance. We wanted to know how well they knew one another and whether or not their friendship needed work.

Armed with a selection of stories about each of them - some true, some false - I read these out to Sting & Shaggy and they had to guess which were true and which were me just getting my creative guns off.

The results were pretty damn hilarious.