Tom Cruise is the hero we need right now

Ok, there are lot of reasons to find issue with Tom Cruise. There’s all the Scientology stuff, obviously. And then there is the whole jumping on Oprah’s couch. And the fact he doesn’t age, like, at all.

But then there’s also a lot of reasons to love Tom Cruise. Edge of Tomorrow. The way he wears a turtleneck. Any movie scene in which he runs.

But in case you were ever in doubt that Tom Cruise is a force for good, just look to the video he posted last night.

Some celebrities make videos about issues that matter to them. Causes they care about. Charities they support. Poverty. Childhood illiteracy. Global warming.

Whereas Tom Cruise, he really wants to end the scourge of motion smoothing on modern TVs. And he needs your help.

What is ‘motion smoothing’, we hear you ask?

Basically, it’s a feature on most high-end televisions that smooths out blur in the picture. It’s designed for live TV or sport, but it is, in fact, a tool of Satan.

I’m taking a quick break from filming to tell you the best way to watch Mission: Impossible Fallout (or any movie you love) at home. pic.twitter.com/oW2eTm1IUA 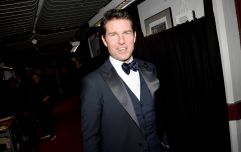 END_OF_DOCUMENT_TOKEN_TO_BE_REPLACED

Essentially, it makes movies look like shit. Utter, total, steaming, shit. It smothers out film grain, making movies shot on film, especially from the 1980s and 1990s, look like they were shot on a shitty digital video. It is horrible and disgusting. I once watched Good Will Hunting on a big HD TV with it on, and made it look like an episode of Love Island.

The real issue is that a lot of TVs have this feature on as standard. Which means it does it automatically, and many people don’t ever turn it off. I can almost guarantee that if your parents got a new TV in the last few years, it is still turned on. And you are going to spend Christmas watching a version Die Hard where Bruce Willis looks like he’s in a YouTube vlog.

God bless Tom Cruise for doing this. This video is so wonderful and weird. Joined by Mission: Impossible – Fallout director Christopher McQuarrie from the set of the Top Gun sequel, Cruise stands there, completely solemn.

He is like Lenny Henry or Davina McCall, presenting one of the serious bits on Comic Relief, following a piece on famine Africa. We need your help to end this horrible affliction. Motion smoothing can be ended in our lifetime.

Tom Cruise isn’t going to come out for Live Aid. Or Children in Need. But the battle against motion smoothing… That’s something we all need to be a part of.

This is his An Inconvenient Truth. His Soccer Aid. His “Do They Know Its Christmas”. He is the Smokey Bear of high definition home entertainment, and he is here to tell you that only you can stop video interpolation.