The children's author continues to sully her legacy as she blocks legendary horror novelist, Stephen King, for simply standing up for trans women

JK Rowling made a name for herself by selling one of the most popular series of children's book in history but, year after year, the woman who left such an impression of so many young kids continues to undermine that through standing by her attitudes and opinions surrounding sex and gender.

END_OF_DOCUMENT_TOKEN_TO_BE_REPLACED

In a recent interview with The Daily Beast, horror genre Hall of Famer, Stephen King, revealed that she had blocked him on Twitter, following a tweet where he stood up for the rights and recognition of transgender women.

The tweet in question was in regards to apparent TERF (trans exclusionary radical feminists) content in connection to the Republican party back in June 2020. As you can see below, all King does is what any well-meaning human being does: recognise a community that has just as much right to identify themselves however they like as anybody else does. Harmless, right?

Well, apparently, not to everyone. Somehow, it was after this tweet that the Harry Potter creator decided she'd had enough of King, as he stated that "Jo cancelled me. She sorta blocked me and all that".

King went on to say: "Here’s the thing: She is welcome to her opinion. That’s the way that the world works". He even caveated that he found the 55-year-old to be on the side of right in many other respects - Brexit and Trump being his two main examples - but accepted that this issue is something "she’s very vehement about. No doubt".

If sex isn’t real, there’s no same-sex attraction. If sex isn’t real, the lived reality of women globally is erased. I know and love trans people, but erasing the concept of sex removes the ability of many to meaningfully discuss their lives. It isn’t hate to speak the truth. 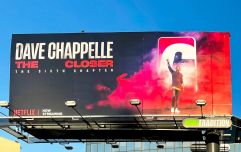 END_OF_DOCUMENT_TOKEN_TO_BE_REPLACED

Rowling has taken flak on numerous occasions, though she still maintains that he has stood by and been "empathetic to trans people for decades". However, the tone of her rhetoric continues to upset people both within and outside the community, with many suggesting that she layered "transphobic bigotry under the guise of feminism".

King went on to say, "If she thinks that trans women are dangerous, or that trans women are somehow not women, or whatever problem she has with it—the idea that someone “masquerading” as a woman is going to assault a “real” woman in the toilet—if she believes all those things, she has a right to her opinion", before adding, finally:

"And that’s what she got angry about—my opinion. It’s like the old saying, 'I don’t agree with what you say, but I will defend to the death your right to say it'. So, nobody has “cancelled” J.K. Rowling. She’s doing fine. I just felt that her belief was, in my opinion, wrong. We have differing opinions, but that’s life".

Advertisement
If you can take one thing away from Rowling's continued miscalculations, it's this: sex and gender are not the same thing - your biology can be one thing and how you feel in your mind another. Not only is that completely fine but it's no skin off anyone else's nose and the onus is on them to accept that, not for those within the community to feel like have to justify themselves.

popular
'Super recogniser' draws 'accurate' modern Maddie McCann to help police find her
The JOE Friday Pub Quiz: Week 272
Chilling video shows moment step mum tried to get away with murdering boy, 6
Mum in jail for murder pays tribute to son, 6, killed by his dad and new girlfriend
Cat suffers from rare condition that makes them gain insane muscle mass
'I did three grams of coke during a game': Inside football's problem with Class A drugs
Man suing company after being 'hung upside down like meat' at Christmas party
You may also like
News
Trans woman left with broken jaw after guards put her in male prison, lawsuit claims
News
Caitlyn Jenner says Dave Chappelle is '100% right' over Netflix controversy
News
Putin labels West 'monstrous' for teaching children they can change gender
Life
Casualty producers announce show will get its first transgender character
Politics
Transgender people should not have right to self-identify without medical checks, says Liz Truss
Next Page