South Park, more than any other cartoon, is known for always being on point – it gets a lot of its humour from satirising what's going on in the world at the time.

They also never hold back when it comes to mocking celebrities, as pretty much anyone famous has discovered in the last 20 years – just ask Tom Cruise.

An ongoing storyline from its 20th season saw it take aim at Donald Trump – although not directly – instead it had Mr Garrison transform into a very Trump-like man.

But now creators Trey Parker and Matt Stone have said they're backing away from satirising the new President – because he makes it too hard. 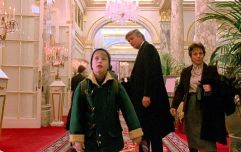 END_OF_DOCUMENT_TOKEN_TO_BE_REPLACED

"It's really hard to make fun of and in the last season of South Park, which just ended a month-and-a-half ago, we were really trying to make fun of what was going on but we couldn't keep up and what was actually happening was much funnier than anything we could come up with. So we decided to kind of back off and let them do their comedy and we'll do ours."

He added: "We were like, f**k him, we don’t want to give him the satisfaction."

South Park is returning for its 21st season later this year. With Trump out of the picture, it looks like some other unsuspecting celebrity is going to have to bear the brunt of Parker and Stone's jokes.