"They don't make games like they used," is something you'll often hear someone say when they look at Call Of Duty or GTAV and not understand why there isn't a life system, or why you don't drop all of your rings every time you land on something spiky.

While graphics and gameplay and immersion and plot-lines and pretty much every aspect of video games have fundamentally improved many times over in the years since the Sega Mega Drive (or Sega Genesis if you're from across the pond), there is still a lot of bank to be made on nostalgia alone. 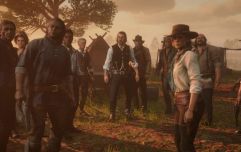 Red Dead Redemption 2 is such a huge game, it may have broken a current generation record

END_OF_DOCUMENT_TOKEN_TO_BE_REPLACED

So with that in mind, you'll be very happy to hear that a collection of dozens of amazingly addictive games from the Mega Drive will soon be made available on current generation consoles.

A version of the collection had previously been released on the PS3 and Xbox 360, and the full line-up of the games made available was pretty impressive:

The Mega Drive Collection is expected to arrive on PS4, Xbox One and PC on Tuesday 29 May, and here is the official teaser trailer for the games, as per the (absolutely brilliantly named) video game website Sonic The Hedgeblog.

‘SEGA Genesis Collection’ coming to PlayStation 4 and Xbox One on May 29. pic.twitter.com/onlWVAaJYJ

popular
Elon Musk slams Jordan Peterson Twitter suspension over Elliot Page post as 'going way too far'
Metallica finally reacts to Stranger Things 'Master of Puppets' scene
Jake Paul is finally fighting a proper boxer as Tommy Fury replacement
Nick Kyrgios could face two years in prison over assault claims as ex-girlfriend speaks out
Instant karma? Senior Tory MP walks into lamppost after squabbling with Steve Bray
Ed Balls and Susanna Reid dance on GMB as protester sings 'Bye Bye Boris'
Corinthians create membership card for Boca Juniors striker after missed penalties
You may also like
Gaming
Why you should be excited for the Tony Hawk's remaster
Gaming
There are some great Black Friday deals on PlayStation 4 and Xbox One
Gaming
This is how Red Dead Redemption 2 has been censored in other countries
Gaming
The cheat codes for Red Dead Redemption 2 are out
Gaming
PlayStation and Xbox users will now be able to play against each other online
Next Page