You can watch Premier League football in the cinema, and apparently no one knows about it

Vue cinemas are showing some Premier League games at select venues in the UK, and tickets are very reasonably priced

The cinema chain is showing games that would ordinarily require a BT Sport subscription to watch. This weekend, for example, you can watch Chelsea v Crystal Palace, Everton v Brighton and Leicester v West Ham. 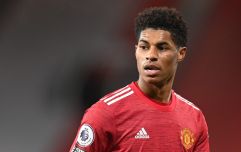 END_OF_DOCUMENT_TOKEN_TO_BE_REPLACED

Maybe you were already clued in enough to know that you could watch football at the movies, but even some of the UK's top football journalists weren't aware. A tweet from The Athletic's Adam Hurrey sparked a conversation about, well, several things.

As @adeymoorhead has pointed out, cinemas are now showing football. When did this begin? And, theoretically at least, is this not brilliant? pic.twitter.com/vmPLfZ92Xr

First of all, if you look at the technical details of the showing, Michael Oliver is listed as the Director of Chelsea v Crystal Palace, which is something of a slight on one of the game's most fair-minded referees. The cast are listed as The Blues and The Eagles, which is also fairly amusing.

In a more serious discussion, the question of how watching football indoors in a cinema is safer than watching it outdoors in a stadium was raised. One person asked: "Doesn't all the scientific evidence point to an enclosed indoor cinema as being much more dangerous for virus spread compared with a big outdoor arena?"

Others pointed out that not only is watching football in the cinema not new, it's been going on for ages. Commenters suggested that it was quite common in the '20s and '30s for the FA Cup Final to be screened in cinemas.

One person pointed out that giving Chelsea v Crystal Palace a 12A rating was perhaps a little unfair. "I know Palace can play stuff you don't want kids to emulate but still," one commenter said.

Ticket prices seem to range from around a fiver to £7 or so, which is easily what you could end up spending on pints down the pub. But then you'd also have pints.

Would you go and see a football match in the cinema? Let us know your thoughts