Noel Gallagher makes feelings known about "communist" Jeremy Corbyn... and every other politician

Noel Gallagher has made it perfectly clear that he's no time for Labour Party leader Jeremy Corbyn... or any politician, for that matter.

In an interview given to Paste, the former Oasis man had explained how he didn't watch the news. 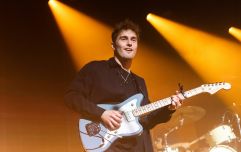 END_OF_DOCUMENT_TOKEN_TO_BE_REPLACED

"If the sky is going to catch fire because some little, fat North Korean idiot flies a rocket into it, let it fucking end," he said.  "I don’t want to know about it. I’d rather be doing something else."

Then asked if this meant he had no opinion on topics such as Brexit, Donald Trump's presidency and Jeremy Corbyn, Gallagher added:

"Fuck Jeremy Corbyn. He’s a Communist. And Trump’s a… I’m not even going to name him. But they don’t affect my life. Well, Donald Trump, maybe, because his views on the environment are pretty fucking scary, and that will affect my children.

Tell us what you really think, Noel.