She has now reintroduced animal protein back into her diet

Miley Cyrus says she turned her back on the vegan diet because it negatively impacted her brain function.

Speaking as a guest on the Joe Rogan Experience, Cyrus said she has now had to reintroduce animal protein back into her diet.

The 27-year-old actress and singer said: "I was vegan for a very long time and I've had to introduce fish and omegas into my life because my brain wasn't functioning properly."

Rogan interjected, telling Cyrus "not to tell that to the vegans".

"That's ok, they're gonna come for me," she responded.

Miley Cyrus said she has reintroduced fish and omega fatty acids into her diet. (Photo: Getty)


Many people become vegan for ethical reasons, namely the treatment of animals. Miley Cyrus said she has this covered. 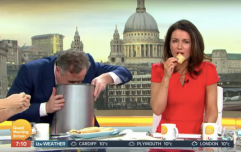 END_OF_DOCUMENT_TOKEN_TO_BE_REPLACED

"I've got 22 animals on my farm in Nashville, I've got 22 in my house in Calabasas - I'm doing what I need to do for the animals."

Cyrus said giving up on veganism has boosted her cognitive function, and given her a renewed sense of mental clarity.

"When it comes to my brain, now I'm so much sharper than I was. I think at one point, I was pretty malnutritioned (sic).

"I remember going to Glastonbury and I was running on empty."

Cyrus said she was on the strictest possible vegan diet, including additional supplements and protein shakes.

Vegans routinely take supplements such as Vitamin B12, as that nutrient is commonly lacking in a plant-based diet.

"Some people can, I could not."

Miley Cyrus was appearing as a guest on The Joe Rogan Experience (JRE). One of the world's most popular podcast shows, JRE recently moved exclusively to Spotify in a deal rumoured to be worth over $100m.

JRE receives 190 million monthly downloads, and is also one of the biggest shows on YouTube. However, by the end of the year, Rogan's full-length shows will only air on Spotify's new 'vodcast' section.


popular
Frank Lampard blasts Marcos Alonso for trying to watch second half on team bus
Bookmaker pays out on Fulham relegation after just three games
Five fantastic Fantasy Premier League tips for Gameweek 4
Planks are one of the worst ab exercises, says Triple H's personal trainer
QUIZ: Guess the footballer from their Wikipedia page #12
A definitive ranking of every swear word from worst to best
Music louder than 85 decibels now illegal in UK bars and restaurants

You may also like
Fitness & Health
Vegan bodybuilder outlines everything he eats in a day to build muscle
Fitness & Health
Animal protein better than plant protein for building muscle, study finds
Fitness & Health
What's the healthiest meal deal you can buy in supermarkets?
Food
KFC vs Subway vs Greggs: Vegan lunch shootout
Life
Greggs' new vegan steak bake - can the public tell the difference?
Next Page