The Lovely Bones author Alice Sebold has apologised profusely after the man sentenced to prison for her rape back in 1982 was exonerated in court last month.

As reported in multiple outlets, Anthony Broadwater, now 61, served 16 years in prison for the wrongful conviction; he was just 21-year-old when Sebold, only 18 herself at the time, was raped on Syracuse University grounds in 1981.

Although he was released from jail in 1999 - the same year that Sebold released and sold over a million copies of her memoir entitled Lucky, in which she refers to the rape directly and her attacker as Gregory Madison - Broadwater had remained on New York's sex offender registry ever since.

This is the moment he broke down in tears as the judge overturned the 40-year-old conviction he had always denied on November 22:

The #Syracuse rape conviction at the heart of Alice Sebold’s memoir was thrown out.

Anthony Broadwater broke down in tears as the judge overturned the 40-yr-old conviction that wrongfully put him in prison for 16 years.https://t.co/wCOoxS04Fn pic.twitter.com/SExDqqipPM

Broadwater reportedly had little to no idea that Sebold had, essentially, found a career, fortune and fame through writing about her story - one that he was mistakenly made a part of. 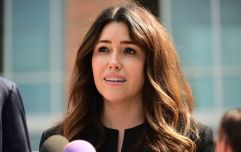 END_OF_DOCUMENT_TOKEN_TO_BE_REPLACED

As well as her memoir, Sebold has been open about the fact that The Lovely Bones' references to rape, sexual assault and murder draw directly from her own experience. The best-seller was turned into a film in 2009 and it was only after a producer working on a Netflix adaptation of Lucky noticed discrepancies in Sebold's account that a private investigator got the case reopened.

Anthony Broadwater, now 61, had no idea his accuser achieved fame and fortune while he has been living as a pariah for over 20 years on the sex offender registry. https://t.co/0arfdnQ0gT

Writing in a statement on Medium, Sebold said:

"First, I want to say that I am truly sorry to Anthony Broadwater and I deeply regret what you have been through.

"I am sorry most of all for the fact that the life you could have led was unjustly robbed from you, and I know that no apology can change what happened to you and never will. Of the many things I wish for you, I hope most of all that you and your family will be granted the time and privacy to heal.

"40 years ago, as a traumatized 18-year-old rape victim, I chose to put my faith in the American legal system. My goal in 1982 was justice — not to perpetuate injustice. And certainly not to forever, and irreparably, alter a young man’s life by the very crime that had altered mine.

Sebold went on to say that while she is grateful his name has been cleared, she is sorry that "he became another young Black man brutalized by our flawed legal system" and "systemic issues in our judicial system", adding that her true rapist will likely "never be known, may have gone on to rape other women, and certainly will never serve the time in prison that Mr. Broadwater did."

Speaking to Syracuse.com, Broadwater responded to her statement, remarking: “It comes sincerely from her heart. She knowingly admits what happened. I accept her apology.”