So Stormzy's apparently got Lionel Richie dancing on the ceiling.

The "Easy" hitmaker has created a Spotify playlist to celebrate some of his favourite British music and Stormzy made the cut.

END_OF_DOCUMENT_TOKEN_TO_BE_REPLACED

Putting the playlist together ahead of his return to the UK for his long-awaited summer tour, it's not just Stromzy that got props from the legendary singer/songwriter.

"The UK has always created incredible music and continues to produce groundbreaking new talent," Lionel said. "I’ll be listening as I get ready to come back to the UK and visit venues in parts of the country I’ve never explored before."

Check out Lionel's Spotify playlist below:

Lionel will be visiting iconic venues across the country in areas such as Northampton, Perth, London, Lincoln, Shrewsbury, Leigh, Carlisle, Scarborough, Chesterfield, Hove and North Norfolk. These will be his first UK shows since receiving glittering reviews for his All The Hits tour in 2016 which included three nights at London’s The O2. 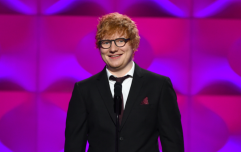