In sponsorship with Hasbro

You have to lie to get to the truth...

A brand new Cluedo game has just launched in the UK - and one of Britain's best known TV detectives has been the first to test it out.

Cluedo Liars Edition is a brand new twist on the classic murder mystery board game.

Line of Duty star Martin Compston put his investigative skills to the test in a new video to support the launch of 'Cluedo Liars', a fresh and innovative twist on the classic whodunnit board game.

In the clip, Line of Duty star Compston is seen staring at a complex web of clues in what appears to be a police investigation room – only to reveal, in a comical plot twist, that he is in fact taking the game of Cluedo a little too seriously.

Multiple suspects; multiple murder weapons. Nothing is as it seems...

Push your detective skills to the limit with the brand new Cluedo Liars🔎#CluedoLiars w/ @hasbro pic.twitter.com/8pGD99oLS9

The opening scene shows the TV detective pacing around an evidence board, claiming: "I know they're lying. One of you did it. It doesn't make any sense". 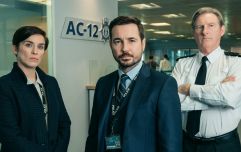 END_OF_DOCUMENT_TOKEN_TO_BE_REPLACED

As the story unfolds, you see pieces of evidence peppered with classic references – from important case files kept in the kitchen, iconic Cluedo character 'Miss Scarlet' being ruled out as a potential suspect and subtle nods to the Scottish actor's best-known on-screen roles.

What is Cluedo Liars?

Sometimes you have to lie to get to the truth - and that's certainly the case with the Cluedo Liars Edition board game.

Where can I get Cluedo Liars?

The Cluedo Liars Edition Game from Hasbro Gaming is available now to buy from Smyth’s, Argos, Amazon and all good major retailers for SRP: £22.00.

popular
Inter Milan planning controversial change to club name and badge
Deep fake meme lads sing sea shanty that will make you want to abandon your childhood sweetheart and circumnavigate the globe
Matthew Perry's dad was a character on Friends and nobody noticed
Boris Johnson facing backlash over handling of Universal Credit cut
"Djokovic is a tool" - Tennis world turned upside down in day of days
Woman left with chemical burns after confusing fireworks for sweets
Men who lost weight during lockdown share their diet and workout plans
You may also like
Entertainment
Line of Duty production to resume next month
Entertainment
Line of Duty series 5 characters ranked from worst to best
Entertainment
This supercut of Ted Hastings in Line of Duty is incredible
Entertainment
10 TV shows to watch on Netflix if you can't get enough of Line of Duty
Quiz
QUIZ: Who said it - Ted Hastings or Sister Michael?
Next Page