Depp would allegedly become 'cruel and misogynistic' when intoxicated

Johnny Depp used to insult his fans by comparing them to suckerfish, a former friend of the star testified during his defamation case against his ex-wife Amber Heard.

END_OF_DOCUMENT_TOKEN_TO_BE_REPLACED

Io Tillett Wright, who was once close to both Depp, 58, and Amber Heard, 36, gave evidence via videolink on Tuesday while maintaining that he still "cares deeply" about his former friend.

A photographer by trade, Wright spoke about meeting Depp in 2013, and how the actor would become "cruel and misogynistic" when drinking and taking drugs.

Depp's passionate fanbase was a target, branding them a type of suckerfish known as remoras, he claimed.

END_OF_DOCUMENT_TOKEN_TO_BE_REPLACED

"He (Depp) would insult his fans, he called them — I remember, he called them remoras, which is a type of suckerfish that attaches itself to the hull of a ship and puts a hole in it and then sinks it," Wright explained.

Depp allegedly said his wife had no talent, and "when her t**s start to sag and her face gets wrinkly, no one is going to be interested in her for anything."

According to Wright, Heard's looks were often the butt of the joke, which Depp "always implied" was why she was famous. 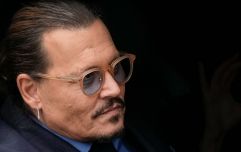 END_OF_DOCUMENT_TOKEN_TO_BE_REPLACED

Continuing to talk to the Fairfax, Virginia, court, Wright added: "He would rail against his mother, his sister - sisters. Pretty much anyone he felt had crossed him or would cross him. He became very nasty."

Depp's drink and drug habits have been a hot topic since the trial began on April 11. From giving Marilyn Manson pills to snorting cocaine with a tampon applicator.

Wright claimed that Depp has personally spoken to him about drug and alcohol use in his former relationships with Winona Ryder, Kate Moss, and Vanessa Paradis.

"He really resented having to be sober," Wright explained. "Yeah, he didn't want to be."

Depp did manage to stay sober for his wedding day, but allegedly told Wright: "We're married and now I can punch her in the face and no one can do anything."

Depp is suing Heard for $50m for an op-ed she wrote in which the actor believes infers he physically and sexually abused her. Heard who is counter-suing for $100m.