Ever the unlikely pairing, the two were at a Cannes Film Festival party together following a screening of John Travolta's new film Gotti hosted by MoviePass Ventures. 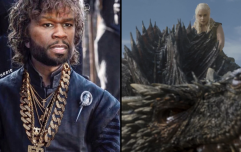 END_OF_DOCUMENT_TOKEN_TO_BE_REPLACED

The Pulp Fiction actor, who has danced on screen in films such as Grease and Saturday Night Fever, accompanied 50 as he performed "Just A Lil Bit", taken from his multi-platinum selling 2005 album The Massacre.

Jeremy Bettis, an executive at 50 Cent's G-Unit record label, posted the video of Travolta enjoying himself alongside the rapper, which was then followed by 50 himself posting a clip to his Twitter account with the caption: "Me and John Travolta partying - I swear I only came out here because of him."

Also joined by G-Unit's Tony Yayo, it's hilarious watching the man who played James in Look Who's Talking getting down to a track that includes the lyrics: "I ain't playin' I'm tryin' to fuck tonight, you heard me? Clothes off, face down, ass up.”

Me and John Travolta partying 😆 l swear l only came out here because of him. pic.twitter.com/naQXTMGnxr

In other 50 Cent news, the trailer for his new movie Escape Plan 2, alongside Sylvester Stallone and Dave Bautista, was released yesterday; it arrives in movie theatres June 29th.

popular
Netflix broadcast someone’s phone number in Squid Game and she got ‘4,000 calls a day’
Salt Bae customers disgusted at price of steak in his London restaurant
Lionel Messi scores his first PSG goal in spectacular style
Grimes says she's starting a 'lesbian space commune' after Musk split
Kevin De Bruyne escapes red card for late tackle and Man Utd fans are fuming
Why Inter Milan had to remove snake from away kit for Champions League tie
Haunted house actor stabs 11-year-old with real knife
You may also like
Music
50 Cent says "Vote for Trump" after seeing Joe Biden's tax plan
News
Police commander allegedly told police officers to shoot 50 Cent 'on sight'
Music
50 Cent says he "wouldn't have a bad day" if his son got hit by a bus
Music
50 Cent confirms his 'Power' spinoff will be a prequel
Music
Eminem and Dr. Dre might be releasing new music this week
Next Page