It was all a dream! We rank the Top 10 Notorious B.I.G. verses

Today marks the 21st anniversary since the death of Christopher Wallace, aka the Notorious B.I.G., who many regard the greatest rapper to ever pick up a microphone.

"Because the greatest rapper of all-time died on March 9th" - Canibus on "Second Round K.O". 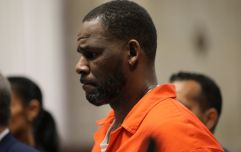 END_OF_DOCUMENT_TOKEN_TO_BE_REPLACED

Already one of the greats before his untimely demise, the potential for Biggie to go into the 21st century as one of the most celebrated poets - in the same way his friend JAY-Z is now - was huge. With remarkable wordplay, what actually set him apart from the rest of the pack was his storytelling capabilities.

Whether it was his playboy antics that got him in trouble on "I Got A Story To Tell", or his tales of inner circle betrayal on "Warning", no one in Hip Hop has ever told a story quite like Biggie. His words leapt off the page and smacked you upside the head and were so vivid that you felt like you were in the story with him.

Check out where we rank your favourite Biggie verses:

"Armed and dangerous, ain't too many can bang with us/ Straight up weed, no angel dust, label us 'Notorious/ Thug-ass ni**as that love to bust,' it's strange to us/ Y'all ni**as be scramblin', gamblin' up in restaurants with mandolins and violins."

"Ni**as is mad I get more butt than ash trays/ Fuck a fair one, I get mine the fast way/ Ski mask way, ni**a, ransom notes/ Far from handsome, but damn a ni**a tote."

"Sitting, reminiscing on when you started dissing/ Spitting in faces in public places/ Rolex with wood faces had you chipper for months/ Made some dough, did some shows, now you're starting to front."

"Relax and take notes/ While I take tokes of the marijuana smoke/ Throw you in a choke: gun smoke, gun smoke/ Biggie Smalls for mayor, the rap slayer, the hooker layer/ Motherfucker, say your prayers!"

"In The Commission, you ask for permission to hit 'em/ He don't like me, hit him while wifey was with him/ You heard of us, the murderous, most shady/ Been on the low lately, the feds hate me/ The son of (Satan), they say my killing's too blatant/ You hesitatin', I'm in your mama crib waitin'/ Duct tapin, your fam' destiny/ Lays in my hands, gat lays in my waist/ Francis, M to the izz-H phenomenal/ Gun rest under your vest by the abdominal."

"I've been in this game for years, it made me a animal/ There's rules to this shit, I wrote me a manual/ A step-by-step booklet for you to get/ Your game on track, not your wig pushed back/ Rule Nombre Uno: never let no one know/ How much dough you hold cause you know/ The cheddar breed jealousy 'specially/ If that man fucked up, get yo' ass stuck up."

"First things first: I, Poppa, freaks all the honeys/ Dummies, Playboy bunnies, those wanting money/ Those the ones I like ’cause they don't get nathan/ But penetration/ Unless it smells like sanitation/ Gar-bage, I turn like doorknobs/ Heartthrob never, black and ugly as ever."

"It was all a dream, I used to read Word Up! magazine/ Salt-n-Pepa and Heavy D up in the limousine/ Hangin' pictures on my wall/ Every Saturday Rap Attack, Mr. Magic, Marley Marl/ I let my tape rock 'til my tape popped/ Smokin' weed in Bambu, sippin' on Private Stock/ Way back, when I had the red and black lumberjack/ With the hat to match."

"I kick flows for ya, kick down doors for ya/ Even left all my motherfuckin' hoes for ya/ Ni**as think Frankie pussy-whipped, ni**a, picture that—with a Kodak, Insta-ma-tac/ We don't get down like that, lay my game down quite flat/ Sweetness, where you parked at?/ Petiteness but that ass fat/ She got a body make a ni**a wanna eat that, I'm fuckin' with you."

"Who the fuck is this? Paging me at 5:46/ In the morning, crack of dawn and/ Now I'm yawning, wipe the cold out my eye/ See who's this paging me and why?/ It's my ni**a, Pop, from the barbershop/ Told me he was in the gambling spot and heard the intricate plot/ Of ni**as wanna stick me like flypaper, neighbour/ Slow down love, please chill, drop the caper."

And just because we like to see peace (and we're sentimental like that) an honourable mention has to go to the original version of "Runnin' (From the Police)", a song that heard the Notorious B.I.G. and 2Pac collaborate (alongside Tha Outlawz and Buju Banton) before their friendship turned sour and both were sadly killed.