Is this the best Graham Norton 'Red Chair' story ever?

Getting a weekly fix of celebrity chatter is all well and good, but arguably the best part of The Graham Norton Show is when the Irish host assumes the role of Dr Evil with his chair-flipping lever.

In case anyone is unfamiliar with the end-of-show segment, an audience member is invited to come and sit in the infamous 'Red Chair'.

They're then asked to entertain Norton and his guests with a funny or interesting story. If the anecdote is a hit, they walk away with credibility intact. If it's a bit rubbish, a lever is pulled that flips the chair backwards. See ya sucker. 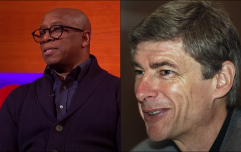 END_OF_DOCUMENT_TOKEN_TO_BE_REPLACED

But there was no danger of that happening with this week's tale. A guy named Sean, from Donegal in Ireland, had Avengers star Jeremy Renner standing to applaud his brutal story of revenge.

He recalled a wedding he'd attended a few years ago. After the 'lovely' ceremony they headed to the reception in good spirits, before the groom announced that he wanted to play a game. That was when any good will immediately went flying out of the window.

But as it's Sean's story, it's only fair that we let him tell it to you, JOE reader.

How's that for a twist?