It was not the reunion episode they were expecting

The Inbetweeners was first aired on E4 back in May 2008 - meaning that the show is now a decade old.

To mark the occasion, Channel 4 announced a special reunion show to be shown on New Year's Day.

This, understandably got some fans very, very excited - Will, Simon, Jay and Neil hadn't been seen on our screens together since The Inbetweeners 2 in 2014.

To be fair, we should state, Channel 4 never said this was going to be a proper episode. Instead, it was always meant to be just a nostalgic reunion show, getting the full cast back together to joke about and tell stories.

And that's what we got. Hosted by Jimmy Carr, Fwends Reunited was filmed in front of a studio audience, and had Simon Bird, Joe Thomas, Blake Harrison, and James Buckley reminisce about making the show. 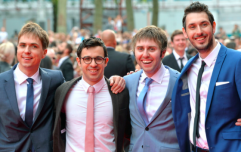 END_OF_DOCUMENT_TOKEN_TO_BE_REPLACED

They came out in a yellow Fiat Cinquecento, they gave out some awards, they tried to stuff Joe Thomas into a suitcase. It was perfectly acceptable, bland TV to watch while recovering from a big New Year's Eve.

However, a lot of people were not happy about it. At all.

Many viewers thought it was going a full-on new episode - and thus were pretty pissed when they basically just got a clip show.

I spent the whole opening credits thinking this was going to be a new episode. #Inbetweeners

Watching the Inbetweeners reunion and dividing my time between pissing myself laughing and wanting to vom at the amount of cringe, awkward interviews

This #inbetweeners thing isn’t quite what I thought it would be...

...was I the only one who thought #FwendsReunited was gonna be a new inbetweeners episode? 👎

There was me excited and expecting to see a 2 hour film/episode of the inbetweeners to turn the programme on and see it’s a bloody talk show. False advertisement 😭 #TheInbetweenersFwendsReunited

#Fwendsreunited was really overhyped. Give us another #Inbetweeners series instead.

Like we sent - it was never advertised as such - but when you see the words "Inbetweeners" and "reunion", we can see why people jumped to conclusions.

Always read the descriptions in your TV guides thoroughly, kids.

popular
New video of Wayne Rooney on night of ‘stitch up’ pics emerges
Simone Biles speaks out after withdrawing from team gymnastics finals
QUIZ: Can you name these 5 players from their career paths?
Conor McGregor deletes disgusting tweet about Khabib's dead father
Police find 48TB of 'mostly adult' material in Shilpa Shetty's home after husband's arrest
Coleen Rooney vows to stand by Wayne after semi-naked hotel picture 'stitch up'
Simone Biles pulls out of Olympic women’s gymnastics team final
You may also like
Entertainment
Americans learn about British schools from the Inbetweeners
Entertainment
Introducing The Inbetweeners to a French person for the first time
Quiz
Personality Test: Which one of the Inbetweeners are you?
Quiz
Personality Quiz: Which Inbetweeners character are you?
Entertainment
QUIZ: How well do you remember The Inbetweeners?
Next Page