Record That Changed My Life

In the third episode of JOE's Record That Changed My Life series, former chief songwriter and drummer for the Kaiser Chiefs Nick J.D. Hodgson delves deep into the White Album by The Beatles and what makes it so special. 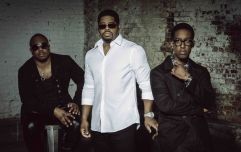 END_OF_DOCUMENT_TOKEN_TO_BE_REPLACED

Released in 1968, the self-titled album by The Beatles (famously known as the White Album) is the ninth studio album from the biggest band in the world. Featuring fan favourites such as "Back in the U.S.S.R.", "Ob-La-Di, Ob-La-Da" and "While My Guitar Gently Weeps" (which was written by George Harrison), the White Album is a double album with a plain white cover that is said to have been intended as a direct contrast to the vividly colourful cover art of their Sgt. Pepper's Lonely Hearts Club Band album.

Nick J.D. Hodgson is the former drummer and songwriter for the Kaiser Chiefs. Responsible for the hits "I Predict a Riot", "Ruby", "Everyday I Love You Less and Less" and "Oh My God", he has since left the band to start a solo career. His debut album, Tell Your Friends, is out now.

Discussing how the White Album changed his life before he had even heard it, Hodgson also talks how Paul McCartney and John Lennon were probably feeling the moment George Harrison delivered "While My Guitar Gently Weeps", and how he and the other members of the Kaiser Chiefs were obsessed with The Beatles during their school and university years.

Watch Nick J.D.Hodgson's Record That Changed My Life below:

Tell Your Friends, the debut album from Nick J.D. Hodgson is out now. Tickets for his upcoming tour are now on sale here.

popular
How did Brian Laundrie’s parents find his remains in a few hours?
Taliban 'behead junior volleyball player and post photos of her head on social media', report says
St James' Park to get new name under Newcastle new owners
The JOE Friday Pub Quiz: Week 266
Real life Squid Game coming to UK and you have to sign a 'medical disclosure' to play
Alec Baldwin asked 'why was I handed a loaded gun?' after fatal on-set shooting
Producer says Alec Baldwin should be charged with manslaughter over accidental shooting
You may also like
Sport
Andrea Pirlo recreates Beatles album cover in Instagram post after Liverpool vs AC Milan legends match
Music
QUIZ: As The White Album turns 50 how well do you know The Beatles?
Music
The Beatles to celebrate The White Album with epic 50th anniversary releases
Music
The JOE Music Quiz: Week 17
Music
The JOE Music Quiz: Week 16
Next Page