New documentary Sir Alex Ferguson: Never Give In to be released in weeks

Sir Alex Ferguson: Never Give In is set for release in a matter of weeks

Sir Alex Ferguson is to feature in a soon-to-be-released documentary in which he shares some of his most treasured memories with his son while recovering from a life-threatening brain haemorrhage. 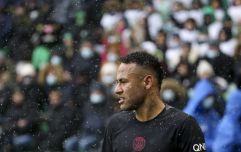 END_OF_DOCUMENT_TOKEN_TO_BE_REPLACED

The legendary Manchester United manager spent time in an intensive care unit in May 2018 having undergone emergency surgery for a bleed on the brain. Aware that his memory might fade, Ferguson recounted some of the most important stories of his life - both in and out of football - to his son Jason as he recovered. These anecdotes form the basis of Sir Alex Ferguson: Never Give In, which will be released in cinemas and on Amazon Prime Video in the UK at the end of May.

Directed by Jason, the film features exclusive and previously unseen archive footage, as well as interviews with those who have known him best - from his wife and three sons, to former players and colleagues such as Eric Cantona, Ryan Giggs, Gordon Strachan and Archie Knox.

While the film sees Ferguson talking at length about his highs and lows as a player and manager, it is described as being "about the bond between a man and his family, an exploration of leadership and mental toughness and a celebration of one of football’s greatest careers."

"Losing my memory was my biggest fear when I suffered a brain haemorrhage in 2018," Ferguson said. "In the making of this film I was able to revisit the most important moments of my life, good and bad. Having my son Jason direct this film has ensured an honest and intimate account."

Sir Alex Ferguson: Never Give In releases in cinemas on May 27 and will be available on Amazon Prime Video in the UK and Ireland from May 29.