Cillian Murphy has joined the cast for A Quiet Place sequel

Just when you thought the world of A Quiet Place couldn't get any scarier, they only went and got Tommy Shelby involved.

Irish actor Cillian Murphy has joined the cast of the sequel to 2018's A Quiet Place, a horror movie directed by and starring John Krasinski.

The Hollywood Reporter has reported that the Corkman will play "a man with mysterious intentions who joins the family unit".

The follow-up to Krasinski's horror debut - which sees civilisation ravaged and forced into silence by a vicious species of creature with super hearing - is set for release on May 15, 2020. There is no official title as of yet but the sequel will also be written and directed by Krasinski. 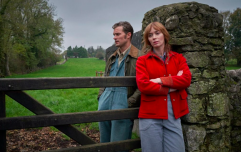 END_OF_DOCUMENT_TOKEN_TO_BE_REPLACED

While Murphy is likely to play a regular old human, he certainly has experience playing creepy or menacing roles in films like Red Eye and Batman Begins, as well as certain scenes in Peaky Blinders.

The first movie starred Krasinski alongside Emily Blunt, who is expected to feature in the sequel but - SPOILER ALERT - Krasinski, whose character dies at the end, will not.


popular
The JOE Friday Pub Quiz: Week 219
A definitive ranking of every swear word from worst to best
Can you get more than 12/15 in this childrens' TV quiz?
34 years on, Peter Shilton still doesn't understand the greatness of Maradona
Funeral parlour workers pose with Diego Maradona's body in coffin
Donald Trump mocked for delivering speech at tiny little table
Kanye West's songs voted better than Eminem in landslide fan vote