For six weeks, Chris Evans battled falling ratings and critics as he tried to steer Top Gear into a new era.

But try as he might, the TV presenter could arrest the slide in the series popularity, and announced in early July that he would not be returning to Top Gear when (if?) the show returns.

Writing in a new column this weekend for the Mail on Sunday, Evans says the decision to leave Top Gear has left him "entirely sad".

'I am entirely sad Top Gear didn’t work out – I would have loved to have carried on working on it,' he admitted.

'But letting go with a smile on your face is far better than clinging on till you look constipated. Know what I mean?'

Evans also addressed fans' comments that the new Clarkson-free era of Top Gear didn't quite have the same chemistry when he was on-screen.

'Some things, however, simply don’t work out. It seems I may well have been a square peg in a round hole,' he explained.

But despite the outspoken criticism of the latest series, Evans maintains he has no regrets about his time at Top Gear. 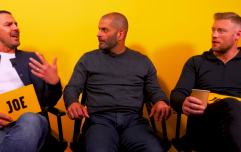 END_OF_DOCUMENT_TOKEN_TO_BE_REPLACED

'What a complete honour, privilege and a pleasure, And yes, I promise, I really did try to make the best show I possibly could,' Evans added.

At the time of writing, it is believed that the BBC will not replace Chris Evans, instead asking for Matt LeBlanc to present the show solo.

It's a move that Evans entirely endorses, saying LeBlanc 'Is the captain Top Gear truly needs going forward, the perfect torso for the rest of TG’s limbs.

'Not only does he eat, sleep, breathe and dream engines, propshafts and trail-braking, but the overwhelming quality that struck me about him is that he’s just such a pro,' he added.

'The whole time I worked with him, he never once looked at the clock, was never late on set, knew his lines inside out and back to front and, most importantly on such an intense production, he always had time for everyone, especially the crew.'

popular
Deep fake meme lads sing sea shanty that will make you want to abandon your childhood sweetheart and circumnavigate the globe
The 12 unbreakable rules of the Full English breakfast
The JOE Friday Pub Quiz: Week 226
QUIZ: Identify which of these 50 players played with Wayne Rooney
Pimlico Plumbers boss announces 'no vaccine, no job' policy
The hardest Marvel Cinematic Universe quiz you will ever take
QUIZ: How well do you know Cool Runnings?
You may also like
Quiz
QUIZ: Can you guess the meanings of all these dash symbols from your car?
News
All new cars to be fitted with speed-limiting technology under EU plans
Life
You can now buy car air fresheners with your best mate's face on
Life
Bank holiday traffic was so bad that people started playing Twister
Life
A man is selling the world's most expensive number plate for £15 million
Next Page