Twisted technology series Black Mirror made a triumphant return to our screens last week and fans are hooked.

Thanks to a wonderful Reddit AMA, we now know the answer is "unicorn semen and sadness".

This week, Brooker was joined by co-showrunner Annabel Jones for a Reddit "Ask Me Anything" to answer fans burning questions.

Here's all the fun stuff we learned. (Mild spoilers for Black Mirror series 2 and 3 await. You have been warned).

Charlie Brooker really wishes he could have written for Doctor Who


Like many a self respecting British sci-fi nerd, Mr Brooker harbours a dream about writing for Doctor Who. unfortunately for him, when the opportunity came to write an episode for The Doctor, he had to turn it down due to scheduling conflicts. In fact, Brooker is so cut up about the fact, he calls missing out on Doctor Who "sadder than anything in anything in any episode of Black Mirror". 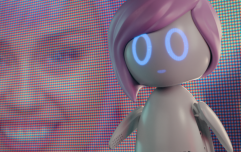 Titles, trailers and synopses released for all the new Black Mirror episodes

END_OF_DOCUMENT_TOKEN_TO_BE_REPLACED

The Black Mirror Christmas Special could have been even darker

2014 special "White Christmas" might be Black Mirror's stand out episode. An anthology series of three interlocking stories, White Christmas starts out bleak, and gets even darker from there. It's a great hour and a bit of television that will make you want to shower afterwards.

But apparently, it could have been even more disturbing. As Brooker explained, he toyed with the idea of giving Oona Chaplin's character, Greta, a son. So when Greta's "cookie" AI character eventually saw the "real" Greta read a story to her baby, she'd be driven mad.

"It was so totally bleak it overpowered everything else so we GOT RID OF THE KID", said Brooker.

Thanks mate, we would not have been able to handle it.


"Playtest" could have been even more messed up

Episode three of the new series is Playtest, a video game based adventure that... is just no good.

But in true Black Mirror style, the episode could have been even more messed up with some fourth wall breaking shenanigans. Good grief.

Black Mirror series 4 is already on the way

"We're about to start shooting one so as soon as we've finished that bit and shot another five, and then given them all a good polish. 2017 almost certainly, in other words", the pair informed us.

But expect it slightly later in the year, as Brooker explained IMDb's January 2017 listing was a little bit ambitious.

END_OF_DOCUMENT_TOKEN_TO_BE_REPLACED

There's plenty of room for sequels too

There have been plenty of rumours about Black Mirror movies and sequels. Robert Downey Jr. has already bought the movie rights to one Black Mirror episode (the memory-hopping series one finale "The Entire History of You"), and Brooker has now said he'd be interested in exploring one of his former tales.

"There have been ideas for 'expanded' versions of some of the stories. I have an idea for a sequel to White Bear for instance. Sometimes the tech (or something similar to it) shows up again in other eps if there's an irresistible story to be told."

Overall, the show wants to be pro-technology


Yes it's a show about the Prime Minister (actually, properly, he did it live on tele) fucking a pig. Yes an awful lot of people die and have their lives ruined. Yes every now and again it feels like a televised thinkpiece about how "technology is bad mmmkay?", but deep down, Brooker and Jones want Black Mirror to be a "hopeful" show.

"We're actually pro-technology, promise. The show isn't anti-tech -- we LOVE all the product and UI design. It's not waving a fist at the iCloud. It's a mix of human stories and sometimes funhouse twist-in-the-tale stuff. The people who think it's grumpy are the grumpy ones. Boo to those people. Booooo."

Charlie Brooker's 2016 Screenwipe will be a mess

In between all this sci-fi chicanery, one can sometimes forget Charlie Brooker got his start doing television reviews. Charlier Brooker's end of year Screenwip is one of the best bits of Christmas period tele, but apparently the 2016 round up will be a bit of a mess.

Well, we say apparently, but we doubt anyone could do a recap of the clusterfuck that is/was 2016 and keep sane.


popular
Can you guess which countries these beers are from?
QUIZ: Can you guess the 90s children’s TV show from the character or presenter?
Real Madrid post 45-word farewell to four-time Champions League winner Gareth Bale
You simply won't get full marks in our international football crest quiz
The Mountain explains how he's been dieting to lose 36kg for Eddie Hall fight
QUIZ: Can you name the 5 Liverpool players in 15 seconds?
Jurgen Klopp scolds Liverpool players for cheering Chelsea red card