It was only a matter of time before this happened.

Arsenal Fan TV is set to make a crossover onto terrestrial television. "The Real Football Fan Show" will make its debut on Channel 4 later this month, and will feature contributors from the popular YouTube channel, which has become famous in recent seasons for its commentary on the Gunners.

Arsenal Fan TV contributors and host Robbie Lyle will appear on the new TV show, which will also feature contributors from other fan channels such as United Stand and 100% Chelsea.


"The football fan revolution hits television, as supporters get the chance to air their views on the latest twists and turns in the Premier League," Channel 4 said about the new show.

"Made for fans, by fans and hosted by Robbie Lyle, this is a no holds barred debate on all the latest news and controversy from the beautiful game. It's going to be emotional." 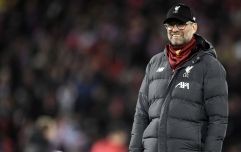 END_OF_DOCUMENT_TOKEN_TO_BE_REPLACED

Each episode of "The Real Football Fan Show" will last 30 minutes, and there are four episodes planned so far. The first edition will air at five past midnight on Friday, April 20 and the series will conclude before the final Premier League weekend of the season.

If you can't wait until the first episode, here's Claude and Ty arguing on Arsenal Fan TV to tie you over.


popular
Manchester United set to 'offer Hakan Çalhanoğlu five year contract'
The Great British Bake Off slammed for 'ignorant and racist' Japanese Week
Extinction Rebellion confront David Attenborough at his home after he criticised the group
QUIZ: Can you identify these world cities on a map?
QUIZ: Can you guess the drink from its can?
Cristiano Ronaldo deletes sweary rant about COVID test
Former Brazil striker Alexandre Pato linked with a sensational return to English football