Who better to ask than unified heavyweight champion Anthony Joshua? He probably knows a thing or two about boxing. 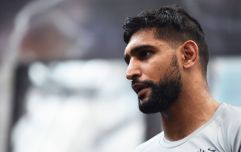 END_OF_DOCUMENT_TOKEN_TO_BE_REPLACED

We sat down with AJ at a VIP fan meet at JD's flagship store on London's Oxford Street - his first public appearance of the year - handed him a laptop and set him watching.

The Fighter, Rocky IV and Creed were the films Joshua was casting a critical eye over, with a little bit of Homer Simpson fighting Drederick Tatum thrown in for good measure.

AJ was most impressed with The Fighter, the 2010 movie starring Mark Wahlberg as boxer Micky Ward and Christian Bale as his troubled coach Dicky Eklund.

“Do you know what I like about this? It looks like it’s actually real,” the heavyweight champ said. “This is what an actual boxing fight is like.”

Homer's spell in the ring was perhaps less realistic, but Joshua still managed to draw a parallel with his own career. "[This is] me versus Andy Ruiz," the boxer joked. "The second time."

Anthony Joshua was speaking at a JD fan meet and greet at their flagship Oxford Street store.