The Khan family also own Fulham FC and the Jacksonville Jaguars

Since they absorbed their main competitors WCW and ECW in the early 2000s, WWE has been the single main player in professional wrestling. 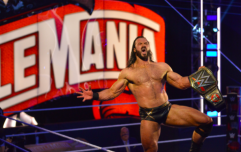 END_OF_DOCUMENT_TOKEN_TO_BE_REPLACED

While the likes of Ring of Honor and TNA have tried over the years, no company has really been able to compete with the deep, deep pockets of Vince McMahon.

This could be about to change, however. Former WWE star Cody Rhodes, along with Elite stablemates Nick & Matt Jackson (aka tag team The Young Bucks), and Adam Page, have officially announced a new company, entitled 'All Elite Wrestling'.

As reported by the Wrestling Observer, the company is headed up by Tony Khan, who is the son of Shahid Khan, the billionaire owner of both NFL side Jacksonville Jaguars and Fulham FC.

According to Forbes, the elder Khan is the 217th wealthiest person in the world, so this would be the first time since the 1990s that the WWE would have faced any competition with that kind of financial backing.

Cody Rhodes and co had been rumoured to be launching a new company several months.

On September 1st, 2018, Rohdes and The Young Bucks held an event called 'All In' in Illinois, that included some of the biggest non-WWE talent from around the world. It was attended by 11,263 fans - making it the first non-WWE wrestling show to sell over 10,000 tickets in the United States since 1999, and caused shockwaves across the pro wrestling world.

September 1st, we, along with Cody sellout Sears Centre for self-financed & self-promoted independent wrestling show, “All In.” pic.twitter.com/41SiwdPPnl

Rhodes - who wrestled in WWE between 2006 and 2016 - formally announced All Elite Wrestling on an episode of his YouTube series Being The Elite on New Year's Day.

An event called 'All or Nothing' will take place in Jacksonville on January 8th, where further information about All Elite Wrestling will be revealed. The poster for All or Nothing, features popular independent wrestlers Christopher Daniels, Frankie Kazarian, and Scorpio Sky alongside The Elite members.

Various other big names have been linked with the new promotion, including Chris Jericho and Jim Ross.

Join us January 8th in JACKSONVILLE for more information on Double or Nothing...and AEW! pic.twitter.com/72gnO6fqOh

popular
The JOE Friday Pub Quiz: Week 243
Madeleine McCann detectives ‘given dramatic new evidence against prime suspect’
Stephen Bear charged in connection with revenge porn allegations
Every Brit 'needs to drink 124 pints' to save the nation's pubs after lockdown
Pro-Palestinian protesters in Lebanon storm Israel border fences
A New York Times quiz can determine where in the UK you come from
The JOE Friday Pub Quiz: Week 242
You may also like
Entertainment
The best wrestling documentaries you can watch online right now
Film
Beyond The Mat remains the greatest wrestling documentary of all time
Sport
WWE legend Kamala has died aged 70
WWE
Former WWE star Marty Jannetty claims to have made a sex attacker 'disappear' in Facebook post
Entertainment
The Evolution of the Undertaker In WWE Video Games
Next Page