It's currently unclear whether the children were released to a guardian

A four-year-old kid fired a gun at police officers at the behest of his father, who had flashed the weapon at Mcdonald's drive-thru employees.

END_OF_DOCUMENT_TOKEN_TO_BE_REPLACED

Sadaat Johnson was at a drive-thru McDonald's in Midvale, Salt Lake City, with his two young children in the back of his vehicle when he engaged in a conflict over his food order. Johnson flashed his firearm at employees then pulled over to await his amended order, reports the Unified Police Department of Greater Salt Lake.

However employees did not fix his order; they called the police, reports KUTV.

END_OF_DOCUMENT_TOKEN_TO_BE_REPLACED

Officers on the scene were unable to remove Johnson, 27, safely, and he was consistently uncooperative. Eventually, Johnson was removed from the car, at which point he instructed his four-year-old inside the car to shoot the officers. The officers reported seeing a small arm wielding a firearm as it rose from inside the car.

As the weapon was fired, an officer was lucky enough to hit the gun, which sent the shot upwards to hit the restaurant's awning. The four-year-old and another child aged three were all removed from the vehicle and their father was taken into custody. 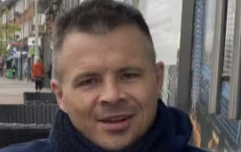 Man convicted of murder after victim named him with dying breath

END_OF_DOCUMENT_TOKEN_TO_BE_REPLACED

The officer who bravely smacked the gun experienced a minor injury to his arm and no other injuries occurred, reports Fox 13.

Officials are yet to announce formal charges and it's currently unclear whether the children were released to a guardian, suggests KUTV.

popular
Jordan Peterson suspended from Twitter over Elliot Page comment - says he won't apologise
Nick Kyrgios tells reporter 'I do what I want' after defying Wimbledon dress code
Brits to bake through four-week scorcher with highs of up to 35C predicted
Premier League player arrested on suspicion of rape
Wildlife trophy hunter who killed lions and elephants gunned down in 'execution-style' murder next to car
Swiss football fan slept rough in Milan for 10 years after getting lost at San Siro
Moment fighter jet appears at the wing of easyJet flight after teen passenger ‘made bomb threat’
You may also like
Social Media
Copenhagen: Chilling video shows shopping mall gunman who killed three in random attack
News
Why R Kelly got jailed for ten years more than Ghislaine Maxwell
News
Mother fatally shot 'at point-blank range' while pushing baby in pram in random act in New York
News
R Kelly will probably die behind bars after being handed 30 year prison sentence
Music
R Kelly sentenced to 30 years in prison for sex trafficking and racketeering
Next Page