COMMENT: Brexit Britain is defining itself as the cry-arses of the world

Theresa May has succeeded... in getting the majority of her fellow MPs to vote for an amendment to the Brexit plan she previously insisted was not up for discussion. She has played an absolute blinder in convincing Parliament to vote down a deal that it took her two whole years to broker. Now she is being sent back to Brussels to re-open negotiations on the backstop that the EU have specifically and repeatedly insisted is not open to re-negotiation. 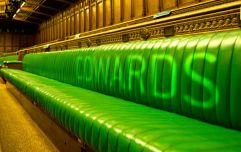 COMMENT: Backbenchers attacking May with murderous metaphors are beyond vile

END_OF_DOCUMENT_TOKEN_TO_BE_REPLACED

Perhaps the Prime Minister assumes that the EU's emphatic proclamations are as hollow and malleable as her own. Maybe she is once again using 'No Deal' as some sort of Doomsday scenario - essentially threatening Europe with the prospect of the UK imploding - which would have a lesser but significant effects on them. Or most likely, it is all about the cry-arse narrative of shifting all blame for our own failings onto the EU.

Brexit started with the innate xenophobia of the faceless Brussels spectre, and it will end there too. Even the eventual realisation that every Leave promise was a lie, and that we are in fact living through the world's greatest shit show, will be blamed on Europe for scuppering what could have been. At the centre of it all is Schrödinger's Brexit - a fictional scenario that could never exist in the real world, and therefore can never be proved wrong.

What the doomed amendment does allow is the likes of Boris Johnson, Nigel Farage, Liam Fox and Jacob Rees-Mogg to bitch and moan about how those nasty EU bureaucrats are thwarting our best efforts to be sovereign and free. It shifts the onus onto Europe to relent on a deal we negotiated with them, and when they inevitably and understandably refuse, there will follow the mother of all hissy-fits about how it was never this difficult during the days of Empire.

There's an abhorrent stink of privilege to it all. The conceited attitude that if you cry long enough and hard enough, nanny will eventually give in and gift you what you want. If you have never wanted for anything, and lived a life so completely insulated from consequence, of course you'll treat any scenario like a game that it is manifest destiny to conquer. Experience informs you that you win even if you lose - because others will always take the hit. 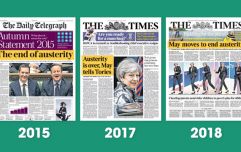 COMMENT: I’m sorry Theresa May, but austerity isn’t over simply because you say it is

END_OF_DOCUMENT_TOKEN_TO_BE_REPLACED

The most laughable thing about Farage, Rees-Mogg and co is that they are clearly living out a weird neo-Edwardian fantasy. From Herringbone Tweed to double-breasted pinstripe, dimpled pint glasses to crowbarred Latin verse. They do their best to adopt the most fetishised elements of imagined Britishness. A key element is of course the 'stiff upper lip' - but they cannot possibly imitate that. Not whilst they are cry-arsing about not getting their own way.

popular
Robinho to begin prison sentence after rape conviction appeal is rejected
Man kept as slave in shed for 40 years on Wales caravan park
Barcelona willing to pay £45m for Brazilian 15-year-old
'My cat is so huge everyone thinks he's a dog - and he's still growing'
A definitive ranking of every swear word from worst to best
Marvel actor Gaspard Ulliel passes away aged 37 in ski accident
British Airways cancels flights to US after 5G concerns
You may also like
News
New record as more than 430 migrants cross Channel in one day
News
Theresa May urges Priti Patel to reconsider policing bill: 'our freedoms depend on it'
News
All living former prime ministers have condemned Boris Johnson's latest Brexit move
News
Gavin Williamson nominated for MP of the year award
Politics
This is how much Theresa May could earn now she’s no longer prime minister
Next Page