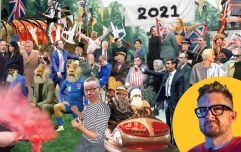 Cold War Steve: How the Banksy of Twitter turned Covid angst into art

END_OF_DOCUMENT_TOKEN_TO_BE_REPLACED

During Gervais' 2018 Netflix special 'Humanity' he referred to Caitlyn Jenner as Bruce and compared being trans to "self-identifying as a chimpanzee."

"I thought his routine about trans people was very lazy," Boyle told Theroux. "I would like him to have the same respect for trans people as he has for animals. I think that's not a lot to ask."

Gervais' love of animals is well documented, not least by this publisher.

Ricky Gervais absolutely adores dogs, but he can't own one

Ricky Gervais explains how he absolutely loves dogs and why he can’t actually own one.

After Life season two is back on Netflix now.

Boyle has covered this ground before in his TV comedy special 'Excited For You to See and Hate This,' which prompted the line of questioning from Theroux on his BBC podcast 'Grounded.'

END_OF_DOCUMENT_TOKEN_TO_BE_REPLACED

In that programme Boyle originally said: "My genuine reaction was, it's not that much weirder than Ricky Gervais saying that he's a stand-up comedian.

In the Theroux interview Boyle agrees that he was "cancelled before it was cool... almost repeatedly." Potentially a reference to jokes made about Katie Price's disabled son, Harvey.

Importantly, Theroux and Boyle also discuss the role of context in comedy - and that writing a joke into a headline will never capture the essence of an audience and show.

All Grounded episodes, including this interview with Frankie Boyle, are available now on BBC Sounds.

popular
Influencer criticised for photoshoot at her dad's funeral
Mum and boyfriend arrested after three children found living next to remains of eight-year-old brother
UFC star Paddy The Baddy explains why he's 'Scouse not English'
Cigarette and tobacco prices to rise at 6pm today
Dave Grohl responds to Nirvana lawsuit: "He's got a Nevermind tattoo, I dont"
Exclusive: RZA opens up about ODB signing with Roc-A-Fella and how it wasn't supposed to happen
Insulate Britain members have ink thrown on faces amid motorway protests
You may also like
Entertainment
Ricky Gervais wants to live to see young generation 'cancelled' by the next one
Life
Ricky Gervais calls Australian council 'c***s' for shooting rescue dogs due to Covid restrictions
News
Ricky Gervais lobbies for ban on all animal experiments in UK
Entertainment
Ricky Gervais clarifies comment that The Office would be 'cancelled' were it made today
Entertainment
Ricky Gervais trolls the Oscars after not being invited to host
Next Page