The least he could've done is plait it for her

Plane etiquette is actually quite simple: stay in your lane and don't bother your fellow passengers. However one person, photographed in a now-viral image, apparently didn't get the memo - and the internet is not happy.

"Would this p**s you off?" wrote the Twitter user known only as Anthony, alongside an image of his fellow passenger who's hair was draped over the back of her seat, reaching far past the fold-down tray.

Would this piss you off? pic.twitter.com/79Xlz0stcK

Since posting the picture on October 20, the image has now gained over 2k quote tweets and countless likes and comments.

People have been offering similar horror stories, inventive solutions and other problem-solving techniques that we're pretty sure count as assault no matter where you are in the sky.

"The solution," tweets one user, alongside an image of a match. Let's be honest, it's probably not the best idea at 42,000 feet. 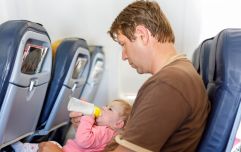 END_OF_DOCUMENT_TOKEN_TO_BE_REPLACED

"A lot of people saying "cut it".... But first, what are you gonna use to cut it on a plane? And second, you are risking catching a case. Sure you can probably win with a jury if you asked her multiple times to move it but still.... Doubt most would cut it if they thought about it," a Twitter mum replies.

One absolute savage replied: "When I was in the 7th grade this girl sat in front of me during home economics class. Every day all throughout the class I would ask her could she mover her hair. She always copped an attitude. One day I was done with it all. I took the scissors to her hair and started cutting."

Coming back from Belize. I put my elbow on it several times. Never fazed her. People are rude. pic.twitter.com/bIhbm3bKNP

A rather creative saboteur suggested: "I would order milk, and accidentally spill it all over her hair. Let that rotten milk smell follow you for the rest of your journey."

popular
Antonio Cassano reveals Cristiano Ronaldo ordered him to 'respect' his achievements
'Super recogniser' draws 'accurate' modern Maddie McCann to help police find her
Mum in jail for murder pays tribute to son, 6, killed by his dad and new girlfriend
Chilling video shows moment step mum tried to get away with murdering boy, 6
Jack Wilshere could be set to resume career with National League Wrexham
The JOE Friday Pub Quiz: Week 272
'I did three grams of coke during a game': Inside football's problem with Class A drugs
You may also like
Social Media
Passenger on flight 'breastfed cat and wouldn't put it back in carrier'
Social Media
Woman arrested for throwing hot soup in restaurant worker's face
Life
TikToker goes viral for getting face tattoo thinking it would 'fade'
Food
Internet left confused after hearing Salt Bae's voice for the first time
Social Media
Asda staff tried to kick out woman for being 'basically naked'
Next Page