The zoo from Tiger King has shut down permanently, says owner

The zoo had been closed due to COVID, but reopened in May

The Greater Wynnewood Exotic Animal Park has shut its doors for good. 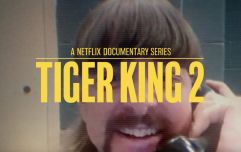 END_OF_DOCUMENT_TOKEN_TO_BE_REPLACED

The zoo, which was, of course, made famous by the Netflix docuseries Tiger King, will be replaced by "a private film set for Tiger King related television content for cable and streaming services," according to owner Jeff Lowe.

In a Facebook post, Lowe announced that he was giving up his zoo exhibitor license issued by the U.S. Department of Agriculture (USDA). In the post, he claimed that USDA had "folded to the pressures of PETA" and had made "false accusations" against him.

The post seems to indicate that the success of the show means that they no longer need to rely on the money from people visiting the zoo.

"[Tiger King] has also provided us with an unfathomable source of income – income that will guarantee the long-term care of our animals and allow us to be very selective going forward," said Lowe, adding that the show had given him "more attention than any human deserves, good and bad".

The Greater Wynnewood Exotic Animal Park had been closed due to the coronavirus pandemic, but reopened its doors to visitors in May.

Tiger King is one of the biggest TV hits of 2020, in case it had somehow passed you by.

Debuting in March, the Netflix docuseries was watched by 34 million viewers in its first 10 days on the service. END_OF_DOCUMENT_TOKEN_TO_BE_REPLACED

The show focused on Joseph Allen Maldonado-Passage, aka Joe Exotic, former owner and operator of the Greater Wynnewood Exotic Animal Park in Wynnewood, Oklahoma, and in particular his feud with  Big Cat Rescue CEO Carole Baskin.

Joe Exotic is now serving a 22-year sentence for 17 federal charges of animal abuse and two counts of murder for hire, including a plot to kill Carole Baskin.

A drama series based on Tiger King currently in production, with Nicolas Cage set to play Joe Exotic.