After eleven seasons, The Walking Dead is coming to an end. 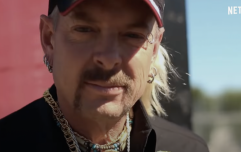 Tiger King 2 trailer has just dropped and it looks wild

END_OF_DOCUMENT_TOKEN_TO_BE_REPLACED

However, it is not the end for the world of the show - two new spin-offs are on their way.

AMC have announced a show focusing on Norman Reedus's Daryl Dixon and Melissa McBride's Carol Peletier, to go into production once the main Walking Dead show has ended.

They are also developing a Tales of The Walking Dead anthology series.

Plus, there is also the already-announced limited series The Walking Dead: World Beyond, following two new female characters.

And, there is of course the first spin-off Fear The Walking Dead, which returns later this year.

"It's been ten years gone bye; what lies ahead are two more to come and stories and stories to tell beyond that,” said The Walking Dead chief content officer Scott Gimple. “What’s clear is that this show has been about the living, made by a passionate cast, team of writer/producers, producers, and crew, bringing to life the vision put forth by Robert Kirkman in his brilliant comic — and supported by the best fans in the world. We have a lot of thrilling story left to tell on TWD, and then, this end will be a beginning of more Walking Dead -- brand new stories and characters, familiar faces and places, new voices, and new mythologies. This will be a grand finale that will lead to new premieres. Evolution is upon us. The Walking Dead lives.” END_OF_DOCUMENT_TOKEN_TO_BE_REPLACED

The Daryl/Melissa spin-off will be helmed by current TWD showrunner Angela Kang.

“I look forward to digging in with our brilliant writers, producers, directors, cast and crew to bring this epic final chapter of Robert Kirkman’s story to life for our fans over the next two years,” Kang said. “The Walking Dead flagship series has been my creative home for a decade and so it’s bittersweet to bring it to an end, but I could not be more excited to be working with Scott Gimple and AMC to develop a new series for Daryl and Carol. Working with Norman Reedus and Melissa McBride has been a highlight of my career and I’m thrilled that we get to keep telling stories together.”

Based on the comic book by Robert Kirkman, The Walking Dead originally debuted all the way back in 2010.